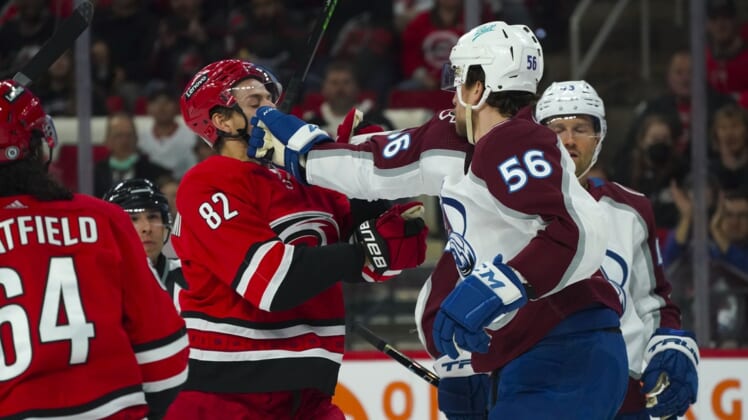 Ethan Bear scored his third goal of the season with 5:40 remaining as the Carolina Hurricanes finally broke through to defeat the Colorado Avalanche 2-0 on Thursday night in Raleigh, N.C.

Antti Raanta made 36 saves for his second shutout of the season and his 10th victory.

Sebastian Aho added an empty-net goal with 1:32 to play.

Bear’s goal came on Carolina’s 35th shot of the game on Colorado goalie Darcy Kuemper, who finished with 35 saves. Bear’s shot came from the point with the puck going past a couple of sticks from Colorado players. Jesper Fast assisted on the goal, helping keep possession from behind the net.

It was the first meeting of the season between teams sporting two of the best records in the NHL.

The Hurricanes extended their home-ice point streak to 12 games.

The Avalanche lost consecutive games in regulation for the first time since October, when it dropped its second through fourth games of the season in regulation.

The Hurricanes went with Raanta for the third consecutive game as top goalie Frederik Andersen is ailing and not at full strength. It marked the first time Raanta has appeared in three straight games this season.

Bear, a defenseman, hadn’t scored since Jan. 1. Aho has a team-leading 25 goals.

The Hurricanes unleashed 19 shots on goal in the first period, while Colorado got going in the second period with 17.

Kuemper did a good job of keeping the Avalanche in the game. Colorado had allowed a total of 13 goals across its previous three games.

The Avalanche had three power-play opportunities and Carolina went on power plays five times – including four chances in the third period.

Carolina hadn’t played since Sunday, while the Avalanche split two road games since then.