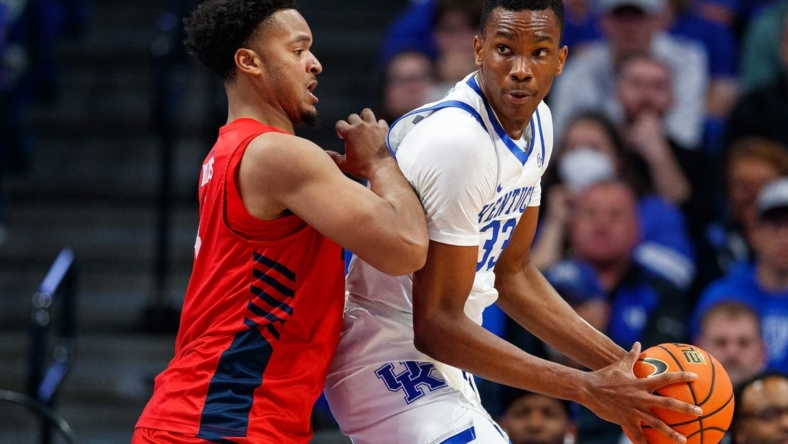 Antonio Reeves scored a game-high 18 points and Sahvir Wheeler added 11 points and 11 assists to lead No. 4 Kentucky to a 77-52 victory over Duquesne on Friday in Lexington, Ky.

Reeves shot 5-for-9 from the field, which included 4-for-6 from beyond the 3-point arc. Wheeler hit 4 of 7 from the field and added six rebounds in his season debut after missing the Wildcats’ opening win over Howard on Monday due to an injured right leg.

CJ Fredrick went 5-for-9 from the field, including 4-for-7 from deep, to finish with 14 points, and Ugonna Onyenso contributed nine points and 10 rebounds for Kentucky (2-0).

Jacob Toppin had eight points and eight rebounds for the Wildcats, who led by as many as 25 points in the second half.

The Dukes (1-1) were led by Jimmy Clark III, who scored 11 points on 4-of-13 shooting to go along with three rebounds, and Austin Rotroff’s eight points and six boards.

The Wildcats, who opened the second half going 2-for-11 from the field with six turnovers, responded with Reeves’ three-point play that jumpstarted a 12-2 run for a 58-37 lead with 8:17 to go.

After falling behind 8-7 in the first six minutes, Kentucky took the lead for good. The Wildcats closed the first half on a 31-14 run to take a commanding, 38-22 lead at the break.

Led by Reeves and Wallace, who each scored seven first-half points, the Wildcats shot 15 of 30 (50 percent) percent from the field, including a stellar 5 of 8 (62.5 percent) from 3-point range.

Clark’s 11 accounted for half of the Dukes’ points in the first 20 minutes.

Kentucky’s Oscar Tshiebwe, the reigning Naismith Award winner and Associated Press Player of the Year, is expected to make his season debut against Michigan State on Tuesday in Indianapolis.

He missed the past two games to recover after undergoing minor knee surgery on Oct. 13.