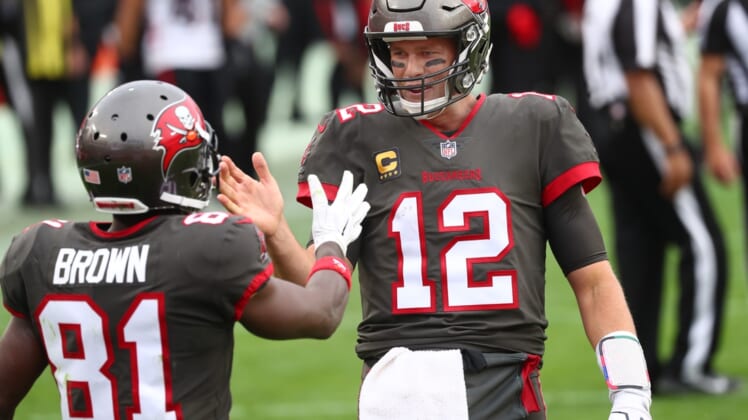 Only hours after releasing a cannonball statement accusing the Buccaneers of forcing him to play hurt and covering up facts related to his injury, Brown was at the keyboard with screen grabs of private conversations with Arians and Brady sidekick and business partner Alex Guerrero.

Brown released a text message string he purports happened last Friday with Arians — two days before the wide receiver removed his jersey and shoulder pads and fled the sideline during a game with the New York Jets.

In a separate screenshot, Brown shared an exchange with Guerrero that included detailed banking information, including routing and account numbers, in a pointed criticism of Brady’s TB12 business ally.

The text string with Arians includes this exchange:

“This is BA. Make sure you are ready to go tomorrow. We ARE NOT resting for the playoffs.

Brown replied with a knees-to-feet photo of his right ankle being worked on and said, “I’m all in coach really cant get to full speed I wanna win wanna be there if I wake up tomorrow feel better I’ll be ready kinda rolled it outside on 2pt play I want what’s best for team lmk when you free I’ll call u.”

Arians, according to the screenshot Brown shared, replied, “Come see me in the morning. We’ll talk it out. Definitely want you with us in case you’re ready.”

Brown, based on his screenshot, loved the Arians reply.

Brown shared an image showing what he identified as a text string with Guerrero regarding the “half” of a $100,000 payment he wanted back. The messages were dated Dec. 24. In the Twitter post accompanying the text message history, he wrote “@TomBrady guy @ag_tb12 charging me 100k never doing the work on me! how u even work wit people like this! This what I was dealing wit.

“Then imagine your QB trainer charging you 100K then doing no work must be was a part of these guys plans all along.”

That message was deleted from Brown’s Twitter feed along with this text exchange from Christmas Eve:

“Hey ag if we not going to work any more that’s fine Lmk about the 100K I paid you only fair get back half my money lmk how to proceed.”

A response labeled with the name Alex Guerrero came around two hours later.

“Good morning AB. I appreciate you reaching out to me. I completely understand you want to go in a different direction. Thank you for the opportunity to work together. I hope for your continued success on and off the field. Please let me know where you want to send the balance. Big hugs my friend.”

In his Wednesday statement released through his attorney, Brown said he was coaxed into playing hurt and took a painkiller the NFLPA discourages using. He said the ankle has painful bone fragments and a ligament torn from the bone, which will require surgery. He did not provide medical support or imaging to back that part of the story.

Brown, 33, was in his second season with the Buccaneers and won the Super Bowl with Tampa Bay last season.

Prior to Sunday’s game in New York, Brown had played just once in two months — the week prior at Carolina — and was targeted 15 times by Brady as the Buccaneers deal with injuries and depth concerns at the position.

His future with the team was in serious doubt in December based on “inaccurate representation of his vaccination status” and reports he purchased a fake vaccination card.

But Arians decided to welcome Brown back while he continued rehab for an ankle injury that was listed on the injury report.

Arians said on Wednesday he agreed with a reporter who asked if it was a matter of “how and not when” the Buccaneers parted with Brown. After he left mid-game in Week 17 at MetLife Stadium, Arians said postgame that Brown was “no longer a Buc.”