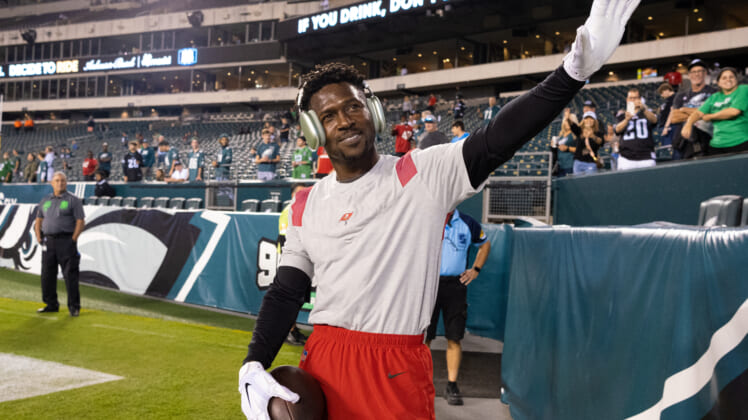 UPDATE: After having a few hiccups, the Tampa Bay Buccaneers are finally releasing Antonio Brown Thursday, January 6, according to Adam Schefter of ESPN.

Having just returned to the field following a three-game suspension for allegedly faking his COVID-19 vaccination card, the Bucs were relying on Brown following the season-ending injury to Chris Godwin.

Unfortunately, that’s just not going to be the case moving forward. Antonio Brown completely lost his mind during Sunday’s win over the New York Jets. He almost completely stripped before leaving the field and quiting on his team.

We now have more information on the situation courtesy of Buccaneers head coach Bruce Arians. Following a Tom Brady-led comeback win, Arians announced that Brown is no longer a member of the organization.

Antonio Brown released, pretty much ending his career in the process

Given the situation that played out in Jersey on Sunday and the drama that has surrounded Brown since his Pittsburgh Steelers days, it’s hard to imagine another team giving him a chance.

Tampa was considering moving off Brown after he was suspended for faking his vaccination card. However, the torn ACL Godwin suffered changed the dynamics big time.

For the defending champs to move off one of their most-talented skill-position players at this stage in the season. Well, it tells us a story that the organization is done with Brown.

If this is indeed the end of the line for Brown’s NFL career, it will go down in infamy as a “what could have been.” Statistically, he’s a Hall of Famer player.

Unfortunately, Brown’s antics during his time with the Steelers, Raiders, Patriots and Buccaneers pretty much throws that entire idea out the window.

It’s a sad culmination to what was an otherwise stellar career.