Antonio Brown has knee surgery, will recover in ‘a few weeks’

Antonio Brown recently had knee surgery, but the Tampa Bay Buccaneers star has a short recovery timeline and should be back in action soon.

NFL Network’s Ian Rapoport provided the update on Brown’s knee surgery and what it means for his contract status:

Brown signed with the Buccaneers last season and gained a new lease on NFL life after it looked like his career was doomed. He caught a touchdown pass in Tampa Bay’s Super Bowl LV win and amassed 45 receptions for 483 yards and four TDs in eight regular-season games.

Tom Brady mentored Brown and helped the All-Pro receiver get his life back in order off the field, which allowed him to contribute to a championship-winning team. Brown is one of many returning players who are trying to run it back for a bid at back-to-back Super Bowls.

But it’s been a rather trying offseason for Brown. Beyond the minor knee surgery, Brown got tagged with a civil lawsuit alleging assault and battery, which his legal team heavily implied was a money grab.

As long as that legal situation ultimately blows over and Brady recovers from his own, more “serious” knee operation, Brown and the Tampa Bay offense should be operating at an elite level in 2021. 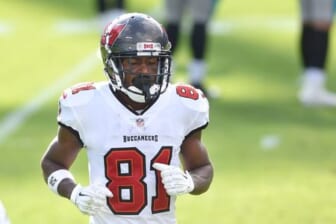