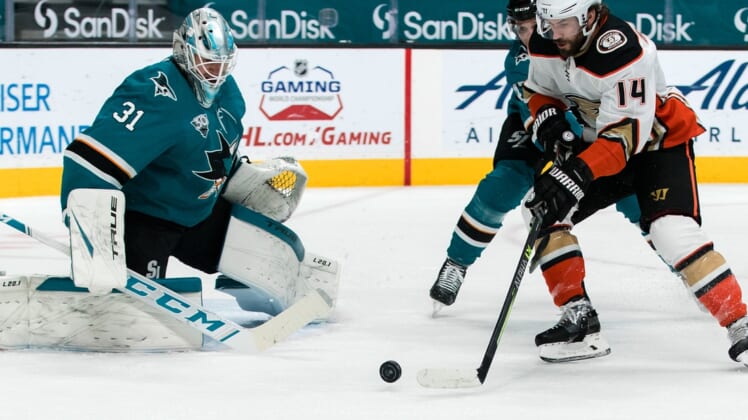 Anthony Stolarz made a career-high 46 saves in his third start of the season as the visiting Anaheim Ducks won 4-0 against the San Jose Sharks on Monday.

Stolarz earned his first shutout since a 1-0 win against the visiting New York Rangers on Jan. 29, 2019, when he played for the Philadelphia Flyers, and the third of his NHL career. He has made 20 NHL starts spread over four seasons while appearing for Philadelphia, Anaheim and the Edmonton Oilers.

Alexander Volkov scored two goals and Max Comtois had a goal and an assist for the Ducks, the last-place team in the West Division. Rikard Rakell also produced a goal.

Martin Jones made 15 saves for the Sharks, who remain four points behind fourth-place Blues with 15 games left for each team.

San Jose lost for the third time in four games. Anaheim had lost five of its previous six games (1-4-1).

The Ducks scored the first of their three first-period goals at 1:59.

Josh Manson started the first scoring play when he poked the puck off the stick of Christian Jaros as tried to exit the San Jose zone.

Volkov made it 2-0 at 8:12 when his stick blade connected with the back of Tomas Hertl’s stick blade just as he was touching the puck, knocking it into the net. It was his second goal with Anaheim since he was acquired in a trade with the Tampa Bay Lightning on March 24.

Adam Henrique set up Volkov’s second goal when he brought the puck behind the net and then centered it to Volkov, who chipped it in the net for a 3-0 lead at 12:19.

Rakell made it 4-0 when he scored on a wrist shot from the high slot at 3:26 of the third period.

The Ducks played without captain Ryan Getzlaf, who sat out for the fourth time in the past five games due to an upper-body injury.

Anaheim also traded defensemen Ben Hutton (to the Toronto Maple Leafs) and Jani Hakanpaa (to the Carolina Hurricanes) on Monday.

To fill the voids, Jacob Larsson moved into the lineup after serving as a healthy scratch the past three games, and Andy Welinski played after spending the past five games on the taxi squad.