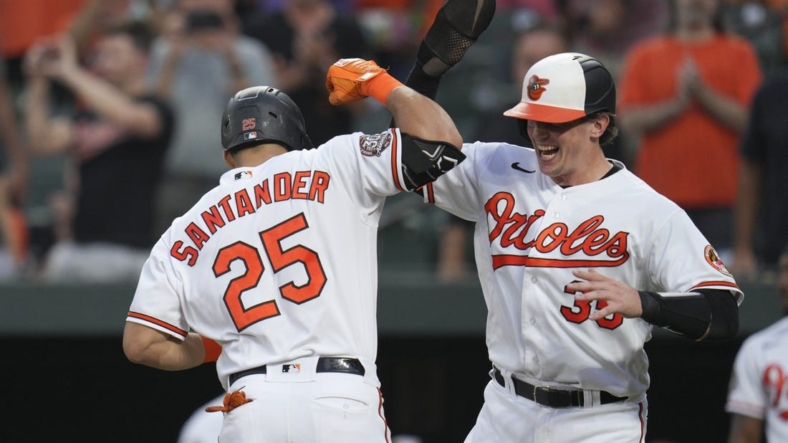 Kyle Stowers belted a game-tying solo homer with two outs in the ninth inning and Anthony Santander had an RBI single in the 11th to fuel the host Baltimore Orioles to a 4-3 victory over the Chicago White Sox on Thursday.

Chicago appeared poised to pick up the win, however left fielder Adam Engel — who entered the game as a defensive replacement — dropped a fly ball in foul territory off the bat of Stowers with two outs in the ninth inning. Given new life, Stowers made the White Sox pay by depositing an 0-2 curveball from Liam Hendriks over the wall in center field for his first career homer.

Baltimore quickly put runners on the corners in the 11th inning before Santander sent a deep fly ball to center field off Jake Diekman (5-3) that allowed Cedric Mullins to score the winning run.

Santander also belted a two-run homer in the first inning for the Orioles.

Felix Bautista (4-3) picked up the win after retiring the side in order in the 10th and 11th innings.

Chicago’s Andrew Vaughn homered on the first pitch of the game and Jose Abreu atoned for a two-error performance with a go-ahead RBI single in the eighth inning. Gavin Sheets collected three hits for the White Sox, who have lost six of their last eight games.

Chicago’s Yoan Moncada, however, exited the game prior to the fifth inning with a tight left hamstring. He appeared to sustain the injury while charging a bunt in the second inning.

With the game tied at 2-2, Sheets ripped a one-out double to right-center field off Dillon Tate in the eighth inning and advanced to third on Luis Robert’s groundout. Sheets was able to trot home after Abreu bounced an RBI single past diving third baseman Ramon Urias.

Baltimore claimed a 2-1 lead after Santander sent a 3-1 fastball from Lance Lynn just over the out-of-town scoreboard in right field. Santander’s homer was his 22nd of the season and second in his last six games.

Chicago forged a tie in the seventh inning after putting its first two runners aboard before Romy Gonzalez scored following a throwing error by second baseman Terrin Vavra.