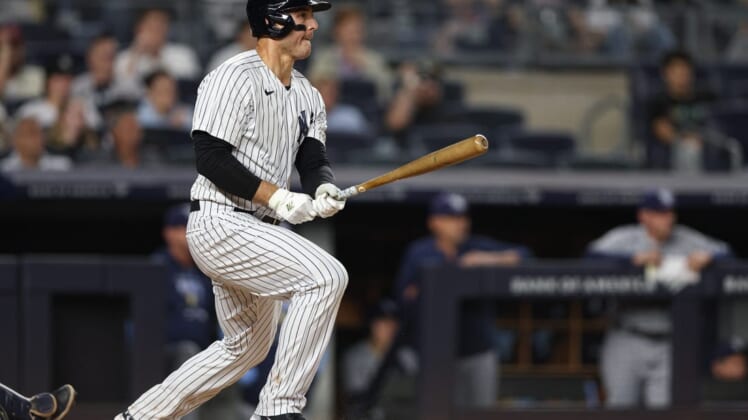 Anthony Rizzo homered with one out in the ninth inning and the New York Yankees ran their home winning streak to 14 games with a 2-1 victory over the Tampa Bay Rays on Thursday night.

Rizzo gave New York its eighth walk-off win when he lifted a 2-1 sinker from Shawn Armstrong (0-1) into the right-center-field seats.

Rizzo’s homer also gave the Yankees their seventh straight win and eighth series sweep this year. New York became the sixth team since 1930 and the first since the 2001 Seattle Mariners to win at least 47 of its first 63 games.

The Yankees are on their longest home winning streak since winning 15 straight at the original Yankee Stadium on Aug. 16-Sept. 26, 1961.

Rizzo hit a tying single in the sixth off Ryan Thompson after the Yankees were no-hit into the fifth.

Michael King (4-1) struck out two and was aided by right fielder Marwin Gonzalez’s diving catch on Yandy Diaz’s liner in the ninth.

New York fill-in starter Clarke Schmidt allowed one hit in three innings in place of Luis Severino, who landed on the COVID-19 injured list. Schmidt struck out five and walked one in his third career start.

The Rays took a 1-0 lead when Mejia hit a 1-1 sinker into the second deck in right after Harold Ramirez was caught stealing second.

The Yankees got their first hit when Aaron Hicks singled to right off Brooks Raley and tied the game in the sixth when Rizzo lined a single to center following consecutive walks to DJ LeMahieu and Aaron Judge.