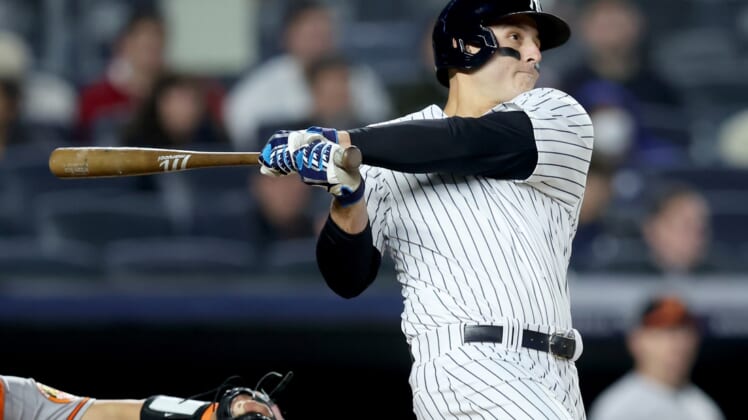 Anthony Rizzo hit three homers for the first time in his career as the New York Yankees recorded a 12-8 victory over the Baltimore Orioles on Tuesday night at Yankee Stadium.

Rizzo hit a three-run drive with two outs in the third off Jordan Lyles (1-2) and connected for a two-run shot in the fifth as the Yankees raced out to a 6-0 lead. He then hit a solo drive just inside the right field foul pole with two outs in the eighth that was confirmed via an umpire’s review.

Rizzo’s first multi-homer game as a Yankee gave him sole possession of the major league lead with eight.

Aaron Judge homered on his 30th birthday in the eighth after the Yankees allowed four runs in the top half of the inning.

Severino allowed a three-run homer to Anthony Santander before retiring Trey Mancini and Ryan Mountcastle to end the sixth. He exited to a nice hand from the crowd after allowing a leadoff single to Rougned Odor.

Severino struck out five, walked two and threw 77 pitches. He also pitched into the seventh inning for the first time since Sept. 19, 2018 at Fenway Park during his 19-win season.

Joey Gallo also homered as the Yankees won their fourth straight and for the sixth time in seven games.

Giancarlo Stanton added an RBI single and Gleyber Torres hit a bases-clearing triple in a four-run seventh. Those hits proved crucial when Mancini hit an RBI single off Lucas Luetge and Hays hit a three-run homer off Jonathan Loaisiga in the eighth.

Aroldis Chapman walked two and finished up in the ninth.

Rizzo made it 3-0 when he lifted a full-count fastball into the first row of the right field seats just over Santander’s leaping try in the third inning.

Gallo made it 4-0 in the fourth when the left-handed hitting outfielder sent an 0-1 changeup to the loading dock in left-center field. Rizzo extended the lead to 6-0 by hitting a 1-2 changeup to right after fouling off three straight pitches.