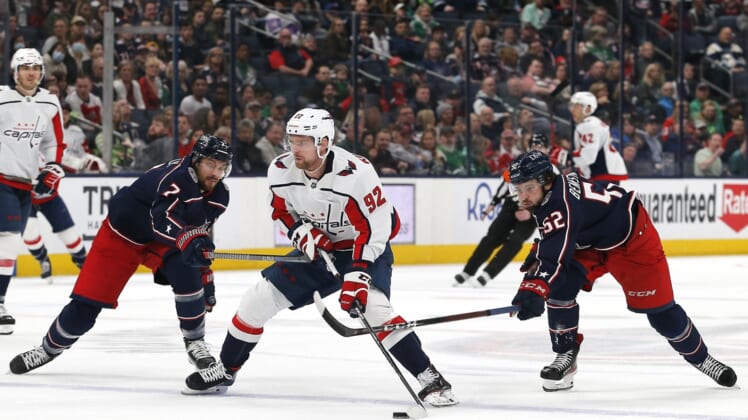 Anthony Mantha scored two first-period goals and the visiting Washington Capitals went on to a 7-2 win against the Columbus Blue Jackets on Thursday night.

Alex Ovechkin and Conor Sheary each had a goal and an assist for Washington, which has won three straight and six of seven (6-0-1). Vitek Vanecek made 39 saves.

Oliver Bjorkstrand and Patrik Laine scored for Columbus, which had won three straight. Joonas Korpisalo allowed three goals on nine shots before Elvis Merzlikins came on early in the second period and made 20 saves.

The Capitals took a 1-0 lead at 4:29 of the first period. Columbus turned the puck over in the offensive end and T.J. Oshie passed up ice to Mantha, who slid a backhander between Korpisalo’s pads on a breakaway.

Mantha made it 2-0 at 12:20 when his shot caromed off defenseman Andrew Peeke, then hit the backboards and bounced off Korpisalo and into the net.

The Capitals caught Columbus on a line change and Martin Fehervary scored on a breakaway at 1:20 of the second period to make it 3-0, prompting the goalie switch from Korpisalo to Merzlikins.

Bjorkstrand got Columbus on the board when he finished off a pretty passing sequence, scoring from just beyond the crease at 6:57 during a power play.

Ovechkin answered with a power-play goal from just outside the left circle at 10:44 for his 38th of the season.

Columbus pulled within 4-2 early in the third period when Laine deflected Zach Werenski’s shot past Vanecek.

Connor McMichael was credited with the goal that made it 5-2 when Columbus defenseman Dean Kukan inadvertently back-handed the rebound of McMichael’s shot into the net at 4:15.

Sheary scored into an empty net at 7:18 when Columbus briefly pulled its goalie, and Evgeny Kuznetsov’s power-play goal at 9:03 made it 7-2.

Oshie left the game in the third period with a lower-body injury and did not return for Washington, which won the season series 3-1.