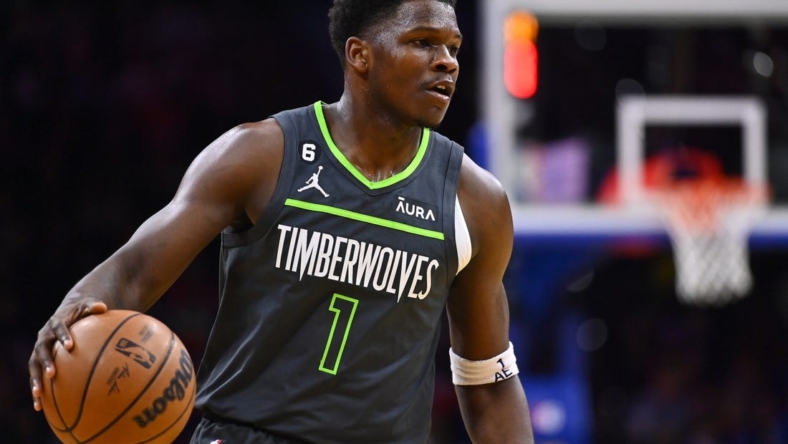 Anthony Edwards scored a team-high 25 points but his most important play of the night came when he disrupted a potential, lead-changing fastbreak attempt to preserve the Minnesota Timberwolves’ 112-109 win over the host Philadelphia 76ers on Saturday.

It was the Wolves’ third consecutive road victory.

Minnesota led by as many as 20 points in the final game of its four-game road swing but surrendered a 19-5 run over the last eight-plus minutes of regulation.

De’Anthony Melton pulled Philadelphia to within a 110-109 margin, connecting on three of his 19 points with 29.1 seconds remaining.

Shake Milton then stole the ball from Edwards on the ensuing Timberwolves possession and raced down the court for a layup. Edwards was right on top of the attempt, however, and Karl-Anthony Towns grabbed his eighth and final rebound. Edwards put the game away with a pair of free throws.

Minnesota surged ahead with a big start to the second quarter before Philadelphia whittled the gap to 12 points before halftime.

The 76ers — down three starters with Tyrese Maxey joining James Harden and Tobias Harris on the bench — struggled to get the deficit back to single digits until the closing stretch.

Joel Embiid fueled the comeback with a game-high 32 points, team-high nine rebounds and six assists. Melton shot 5-of-9 from 3-point range and Milton finished with 27 points on 10-of-15 shooting.

The final miss was a backbreaker for the 76ers, however, who had their three-game winning streak snapped.

Georges Niang added 15 points for Philadelphia, though he shot just 1-of-7 from 3-point range.

Minnesota got 19 points and seven assists from D’Angelo Russell, and Jaylen Nowell’s 13 points led the Timberwolves to a 37-20 advantage in bench points. Naz Reid and Taurean Prince added nine points each in reserve duty.