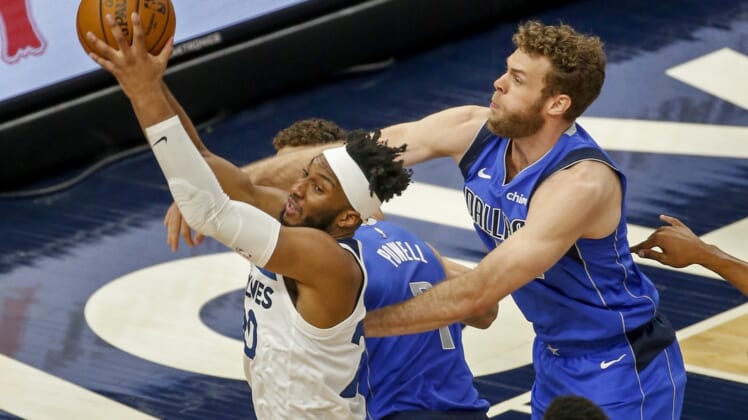 Anthony Edwards closed his push for NBA Rookie of the Year with 30 points, and the Minnesota Timberwolves dominated the Dallas Mavericks nearly wire-to-wire for a 136-121, season-ending win, Sunday in Minneapolis.

Edwards capped his debut season with his eighth game of 22 or more points over the final nine. He is in contention to be Minnesota’s first Rookie of the Year since teammate Karl-Anthony Towns, who won the award in 2016.

Towns went for 23 points and nine rebounds in Sunday’s regular-season finale, and helped key the Timberwolves (23-49) to a 62-38 advantage for points in the paint.

After trailing 6-3 in the game’s opening minutes, the only time Minnesota played from behind all night, the Timberwolves began to assert that edge in a 17-2 run from which Dallas never recovered.

His two made attempts from deep were part of a deluge of five Minnesota 3-pointers in the first quarter. The Timberwolves finished the night 17 of 40 from beyond the arc, led by Edwards’ 5-of-9.

McDaniels and D’Angelo Russell each made three 3-pointers, and Russell produced a double-double of 23 points and 10 assists.

Dallas shot 16-of-38 from 3-point range, including Kristaps Porzingis making 4 of 5. Porzingis finished with 18 points.

Luka Doncic scored 18 points with six rebounds and six assists for the Mavericks, but shot just 2 of 7 from outside. Dorian Finney-Smith went 3 of 5 from deep and scored 15 points in the loss.

Dallas came into Sunday a game ahead of Portland and the Los Angeles Lakers in a tight race for playoff seeding. A win would have locked up the No. 5 seed.

The Mavericks clinched the No. 6 seed after their win Friday over Toronto and thus avoid the play-in tournament, despite losing in Minnesota.