Why LaMelo Ball winning ROTY over Anthony Edwards would be ridiculous

When it comes to the Rookie of the Year award, there are several ways to approach who is more deserving. While some knock Anthony Edwards for not winning more games, we’ve seen in the past, wins don’t appear to be a factor for the trophy. In the end, in my opinion, it should go to whoever impacted the game the most. Whichever player teams had to game plan against, or focus their defense on.

To me, that player this year was none other than Anthony Edwards of the Minnesota Timberwolves. For a number of reasons, many basketball fans have come to the same conclusion. Yet, just as it was speculated before selection night, there’s no true consensus regarding who the No. 1 player is from the 2020 draft class.

Believe it or not, some publications have even tried to suggest Ant isn’t even in the top-three for the rookie award. To no surprise, the league didn’t appear to agree, listing Ant as one of three finalists.

This article goes into why Anthony Edwards was the best rookie in the NBA during the 2020-21 season. 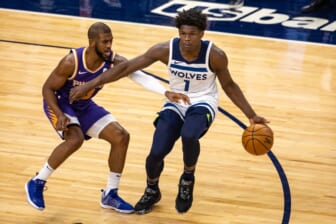 LaMelo Ball missing for a third of the season

Had LaMelo Ball not missed nearly a third of the season (21 games) due to injury, the rookie race would have been a lot more thrilling. We can’t take away from the fact that he was special for the Charlotte Hornets in the 51 games he played, but how many times did he truly take over the game?

Not that taking over a game is a pre-requisite to winning an award, but when compared to Anthony Edwards, it should be. After a mid-season coaching change, Edwards stealing the show became a common routine. Perhaps had Ball gotten that same amount of floor time lost from injury, we’d have seen a similar level of growth, but we didn’t.

Melo showed a high basketball IQ and made some incredible passes that a rookie shouldn’t be able to make, but scoring points is what wins basketball games. And Edwards was by far the best rookie scorer in his draft class this season.

Making the case for Anthony Edwards

While his defense was lackluster at best early on, it wasn’t hard to see the young pup grow into a Wolf before our eyes on offense. Don’t get me wrong, he has a long way to go before he becomes above-average defensively. But the rapid improvement is very encouraging from a 19-year old receiving NBA coaching for the first time in his life.

After nabbing only 23 steals in his first 32 games, Ant went on a 25-game steal streak, amassing 41 swipes over that span. Something clicked.

Anthony Edwards deserves to be on top of the hill

Showing some progress on defense was crucial to see, but that’s not where he earns his stripes. Offensively, Ant showed his teeth — becoming a more efficient scorer as the season went on.

Against the Toronto Raptors, Edwards had possibly the dunk of the year. Late in the season, playing the second seed in the Western Conference, Ant scored 42 as the Wolves blocked out the Phoenix Suns for a game.

In exactly half of the 72 games Ant played, he scored 20 or more points. That’s as a rookie.

Sure, you can argue the Wolves didn’t play a lot of competitive games, or that with a few top scorers on the team missing many games due to injury or suspension, it was all done in garbage time. Yet, opposing NBA coaches will tell you, stopping Ant at times simply couldn’t be done.

There’s also something to be said about simply being available to play every day. It’s not Ball’s fault he got hurt. Many rookies miss some time. That’s pretty typical for a player who doubles the number of games played from college to the NBA. But Ant somehow didn’t miss a contest.

Admittedly some moments were ugly early on. This is the Minnesota Timberwolves we’re talking about. There’s a reason they drafted first and fired their coach after 31 games. Yet, with Ant, Karl-Anthony Towns, D’Angelo Russell, and the rest of the young core, there’s some hope for NBA relevance in the Twin Cities once again.

Having a situation such as two athletes on track for basketball stardom competing for a rookie award seems trivial. They should both be greatly celebrated since, at one point, many questioned whether this draft class had much elite talent at all. The truth is, both players are incredibly fun to watch and they have their own unique styles that bring something different to the game.

LaMelo Ball has been playing basketball since he could walk, whereas Anthony Edwards is likely learning new things about the sport every day. In the NBA, coaches probably love having their hands on a ball of clay like Ant who seems eager to become an alpha Wolf.

It’s hard not to imagine what type of player he can become once he reaches his full potential. So far, Edwards looks like a superstar.

We’ll see how POBO Gersson Rosas places the trees on Ant’s sleeves to help feed his growing pack. Fans in Minnesota have been waiting for a long time.

Anthony Edwards seems to be progressing toward becoming a legend on the court, but he already has plenty of legendary post-game quotes. As he’ll tell you, A1 from day 1. There’s no other way to put it.