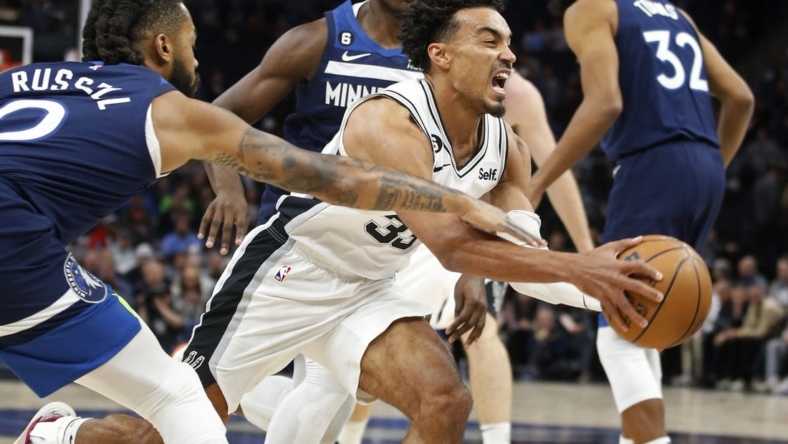 Anthony Edwards scored 34 points and hit seven 3-pointers at the Minnesota Timberwolves defeated the short-handed San Antonio Spurs 134-122 on Wednesday two split a two-game series between the teams in Minneapolis.

Minnesota did not record an offensive rebound in the contest. However, the Timberwolves didn’t need to crash the boards, as they outshot San Antonio 65 percent to 45.3 percent and nailing 20 of 34 3-point attempts.

The Timberwolves led by 15 points at halftime but by just eight after three quarters. San Antonio pulled within 123-114 on Doug McDermott’s three-point play with 4:33 left. Minnesota clinched the win when Edwards reeled off six straight points in the paint over a 47-second stretch beginning with two minutes to play.

The Spurs, which had a three-game win streak snapped, played without guards Devin Vassell (knee) and Joshua Primo (back), who got hurt in the Monday win over Minnesota.

The Timberwolves led just 28-26 before running off an 11-2 spurt to end the first quarter and take an 11-point advantage after 12 minutes of play.

Edwards, who had just nine points in the Timberwolves’ loss on Monday, scored 16 points in the period. Minnesota hit 10 of 13 3-point attempts in the first quarter.

Edwards led all players with 18 points in the half while McDaniels had 13 points for the Timberwolves. No San Antonio player reached double figures in the first half.