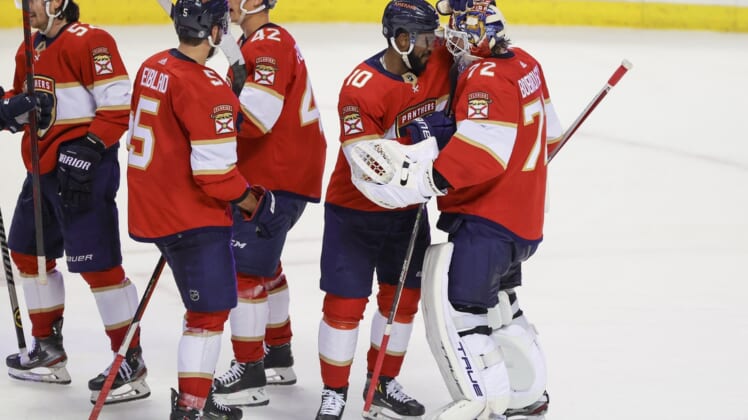 Anthony Duclair scored with 2:07 remaining in overtime to give the Florida Panthers a 4-3 road victory over the Carolina Hurricanes on Saturday night in Raleigh, N.C.

Duclair intercepted Brady Skjei’s pass in the neutral zone and then joined Jonathan Huberdeau on a two-on-one rush. Huberdeau then passed to Duclair cutting in front of the net where he fired a wrist shot inside the left post for his 14th goal of the season.

Carter Verhaeghe scored twice and Huberdeau had a goal and assist for Florida, which moved into a tie with Tampa Bay for first place in the Atlantic Division. Sergei Bobrovsky made 24 saves for his 16th win of the season.

Teuvo Teravainen, Skjei and Seth Jarvis scored and Sebastian Aho had two assists for Carolina, which had a five-game winning streak snapped. Alex Lyon, making just his second start of the season, finished with 32 saves.

Florida took a 1-0 lead on the first shot of the game just 65 seconds into the contest on Huberdeau’s 13th goal of the season, a wrist shot from the high slot past Lyon’s blocker side.

Carolina, playing the second half of a back-to-back that began with a 6-3 victory over Calgary on Friday, tied it with a power-play goal by Teravainen at the 3:34 mark of the first period. Teravainen, alone in the left circle, slowly skated in and then fired a wrist shot into the far corner for his 10th goal of the season.

Verhaeghe made it 2-1 near the end of the period when he finished a two-on-one rush with a wrist shot from the left circle that deflected off Lyon’s glove and trickled in over the line.

Florida increased its lead to 3-1 on Verhaeghe’s second goal of the game and 10th of the season 35 seconds into the second period on a wrist shot from the left faceoff dot that clanged in off the far post. It marked the 16th straight period that the Panthers scored a goal, a team record.

But Carolina rallied to tie it on Skjei’s one-timer from inside the blue line at the 14:14 mark of the second followed by Jarvis’ sixth goal of the season early in the third period when he split the defense and fired in a snap shot from the right circle.