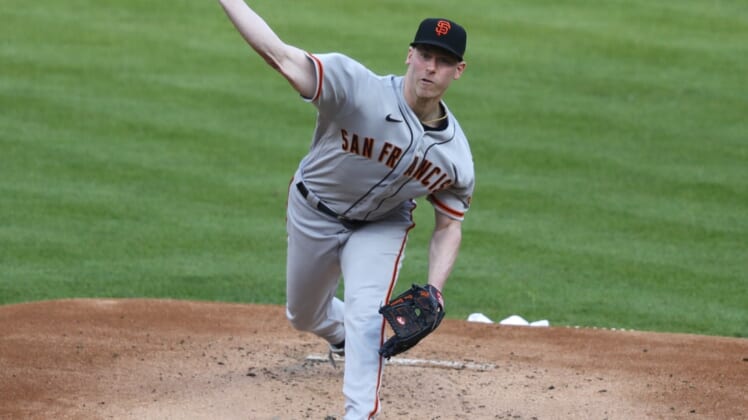 Alex Dickerson clubbed a go-ahead three-run homer for one of his three hits and Anthony DeSclafani yielded one run over seven innings as the visiting San Francisco Giants won their third straight, 4-2 over the Cincinnati Reds on Tuesday.

Brandon Crawford also homered for one of his two hits as San Francisco overcame a season-high 17 strikeouts to win for a second consecutive night at Cincinnati. The Giants have eight victories in their past 11 games overall.

DeSclafani (4-1), who spent the previous six seasons in the Reds’ organization, allowed only a leadoff homer to Jesse Winker in the first inning plus five other hits. He finished with seven strikeouts and two walks.

Winker and Nick Castellanos, who also went deep, each had two hits for Cincinnati, which has dropped four of six.

Reds starter Luis Castillo (1-6) struck out a season-high 11 while allowing three runs on six hits and three walks over five innings. However, his one serious mistake was costly, the game-changing blast from Dickerson in the fourth inning that landed in the Giants’ right field bullpen and ultimately sent Castillo to his fifth loss in his past five starts.

After Castillo struck out the side in top of the first, Winker opened the bottom half by smacking an 0-2 pitch into the right-center-field stands.

In the fourth, Castillo allowed back-to-back singles to Crawford and Mauricio Dubon before Dickerson gave the Giants a 3-1 lead with his fourth home run of 2021. The blast allowed San Francisco to set a franchise record with a homer in a 15th straight road contest.

The Giants added another when Crawford clubbed his 10th of the season in the seventh, just inside the right field foul pole, to make it 4-1.

With DeSclafani out of the game, Castellanos made it a two-run game with his 11th homer in the eighth, on an 0-2 pitch off Zack Littell.

Jake McGee pitched a perfect ninth for his 11th save.