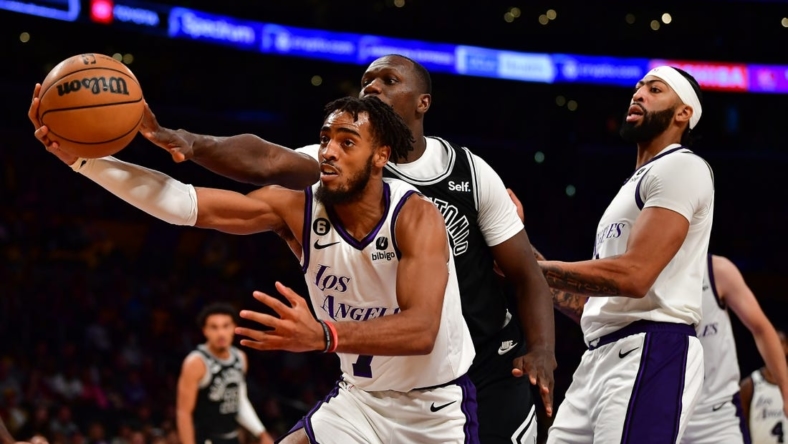 The Lakers were without LeBron James for the fourth straight game because of an adductor strain but barely missed a beat. They were up by 18 points at halftime and never allowed San Antonio to get in contention.

It didn’t help that the Spurs missed their first nine shots of the third quarter, not making a field goal for the first 7:32 of the period while falling into an 85-53 hole. Los Angeles led 95-67 after three and cruised to the finish.

Austin Reeves added 21 points for the Lakers while Lonnie Walker IV scored 14, Thomas Bryant hit for 15, Kendrick Dunn and Dennis Schroder contributed 13 points each, and Russell Westbrook had 10 points and 10 assists off the bench.

The Spurs dropped their fifth straight — going without a win in a five-games-in-seven-days road trip — and have lost 10 of their past 11 contests overall.

The Lakers led for all but the first three minutes of the game and rolled to a 34-20 advantage at the end of the first period. Davis scored 18 points in the first quarter, including Los Angeles’ final four. The Spurs never got closer than 10 points, with the Lakers pushing their advantage to as many as 21 before settling for a 66-48 lead at the break.

Davis led all scorers in the half with 20 points. Reaves added 17 and Bryant had 10 for the Lakers, which outshot San Antonio 54.3 percent to 42.3 percent.

Vassell led the Spurs with nine points over the first 24 minutes. San Antonio took one free throw in the half and missed it.

San Antonio played without Jakob Poeltl, who had been its leading scorer in two of its past three games. Poeltl has a sore right knee. Spurs coach Gregg Popovich also missed the game after falling ill before tipoff. Assistant Brett Brown ran the team in his stead.