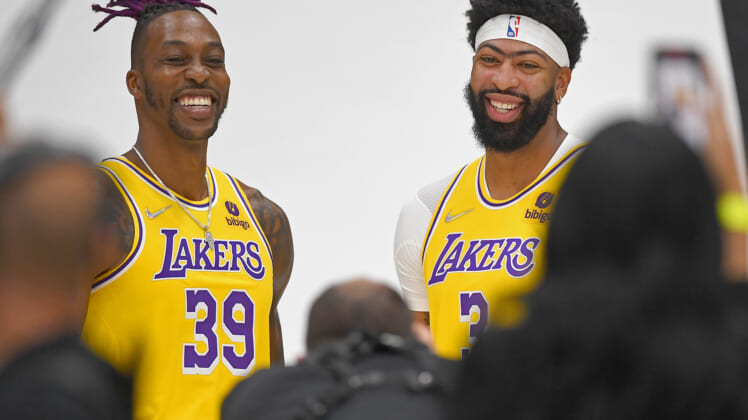 It only took two games for the Los Angeles Lakers to cause some drama. Not only is their 0-2 record embarrassing for any team with playoff aspirations, they’re drawing attention for what’s happening on the sidelines during the game.

In Friday night’s contest against the Phoenix Suns, star big man Anthony Davis was seen going back and forth with fellow Lakers post man Dwight Howard, even shoving the former Dunk Contest champion at one point.

With the accomplished veteran roster the Lakers put together, they were always going to face challenges at some point, but this was unexpected. Not this early, with just over 2% of their regular season in the books, there’s a long way to go.

The Lakers have a total of seven players who have made it to the top, earning an All-Star appearance at some point in their careers. These are basketball players who still feel they have the skillset to be one of the best. Sometimes it’s hard to set aside that ego with one common goal in mind.

In Howard’s case, he used to be regarded as one of the best centers in the game, whereas The Brow has always been among the game’s best. Maybe this spat even has something to do with the NBA’s revealing of its top 75 players of all time with the release of the 75th Anniversary Team.

Anthony Davis made the team, Dwight Howard did not. Howard is known to be upset about not being recognized as one of the greatest. Maybe that’s as simple as it gets in this case. Is it possible Howard isn’t even that upset with Davis, and may just be frustrated with the recent events, piled on by the Lakers starting 0-2? That’s probably all we’re seeing.

For those wondering, the Lakers cannot trade D12 until November 5. The NBA has a recently-signed trade restriction where a recently-signed player cannot be traded for three months from the date of his official signing. Since Howard was signed this offseason, the Lakers are stuck with him for at least a few more weeks.

For their part, the Lakers are doing their best attempt at damage control, with Howard saying the dispute was squashed on the sideline, almost immediately after it happened.

We’ll see how this minor spat affects the Lakers going forward. After an 0-2 start, things can’t get a whole lot worse. But, then again, maybe they can? Their next test comes on Sunday against the Memphis Grizzlies, who will be coming off a back-to-back.