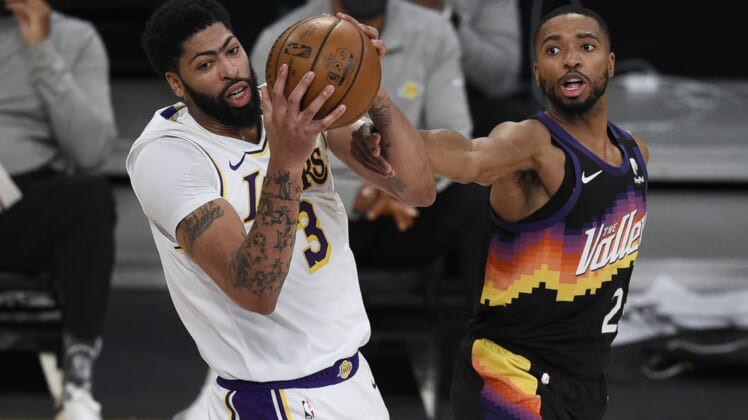 Anthony Davis’ 42 points and 12 rebounds and the Los Angeles Lakers’ 13 made shots from 3-point range overwhelmed the Phoenix Suns in a 123-110 win on Sunday night in Los Angeles.

Los Angeles (38-30) avoided the three-game season sweep by Phoenix (48-20) and remained one game behind the Portland Trail Blazers for the No. 6 spot in the Western Conference standings with four games left.

The top six teams avoid the play-in tournament to reach the playoffs.

The Suns are now two games behind Utah (50-18) atop the Western Conference with only four games remaining. 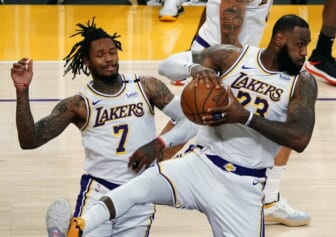 Ben McLemore went 4 for 7 from 3-point range and Kentavious Caldwell-Pope was 4 of 9 from that far for Los Angeles. McLemore had 12 points and Caldwell-Pope 17.

Los Angeles, which lost eight of its previous 10 games, was without LeBron James, Kyle Kuzma and Dennis Schroder.

After being out six weeks because of an ankle injury, James has missed the last four games with the same injury. Kuzma was sidelined with tightness in his back and Schroder is out due to the NBA’s health and safety protocols.

Deandre Ayton, coming off a 26-point and 15-rebound performance against the New York Knicks on Friday, had only six points and six rebounds against the Lakers.

Cameron Payne had a career-high 24 points on 9-of-10 shooting from field, including 4 of 5 from 3-point range.

Chris Paul had 13 points and 10 assists.

Devin Booker finished with 21 points, but he made only 5 of 14 shots from the field and missed his only 3-point attempt.

Phoenix, which never led, cut the lead to 78-67 with 4:14 left in the third quarter, but a 3-pointer by McLemore and two free throws and a jump shot by Davis pushed the lead to 85-68 about a minute later.

The Suns then made only one more shot in seven attempts, had a turnover and Jae Crowder was whistled for a technical foul.