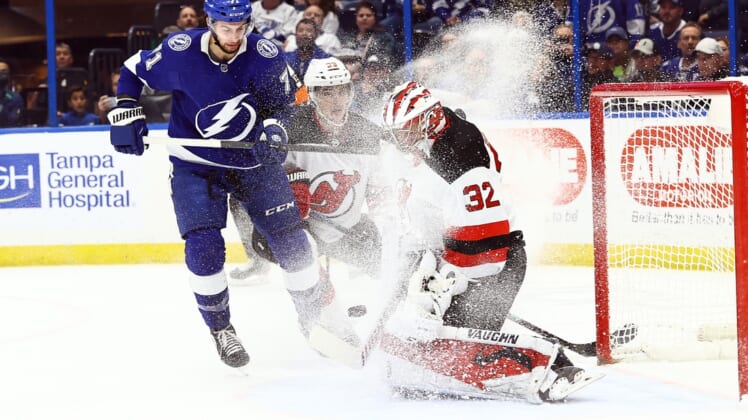 Anthony Cirelli scored the tiebreaking goal midway through the third period as the Tampa Bay Lightning rallied past the visiting New Jersey Devils 3-2 on Thursday night.

Brayden Point delivered a pass to Cirelli in front of goalie Jon Gillies, and Cirelli shoveled in his 12th of the season for the game-winning tally. The Lightning won their third straight at home to go to 11-1-1 in the past 13 on their ice.

Alex Killorn and Mathieu Joseph netted goals, and netminder Andrei Vasilevskiy (24-7-3) stopped 31 of 33 shots to beat the Devils for just the third time (3-4-0).

Following a five-game absence, Ondrej Palat had an assist in his return for the Lightning, playing left wing on a line with Point and Cirelli.

Damon Severson and Jack Hughes found the net and Jesper Bratt increased his point streak to seven straight with two assists for New Jersey, which lost for the sixth time in seven games.

Devils defenseman Ty Smith (upper body) was activated and back in the lineup for the first time in four games.

Inside the first five minutes, the Devils won a matchup with the Lightning’s vaunted penalty kill for a power-play goal. With Mikhail Sergachev in the box for high sticking, Severson ripped in a long point shot that sailed over Vasilevskiy for his sixth tally, with Bratt assisting for the 1-0 lead.

It marked the Devils’ sixth consecutive game with a power-play marker — their first time accomplishing the feat since a streak from Oct. 17 to Nov. 2, 2019.

Tampa Bay had not allowed a man-advantage marker in seven straight games on home ice.

At 1:46 of the second, Killorn knotted the score with a power-play goal, using some handsy skill to backhand home his 14th.

Later, while short-handed, Cirelli was awarded a penalty shot – the first of his career — with 6:10 remaining, but the high-energy forward’s attempt was kick-saved by Gillies.

But 26 seconds later, Joseph capitalized short-handed on a two-on-one break by potting his own rebound for a 2-1 Lightning lead — his eighth.

In the third, Hughes’ 11th tied it at 10:55 before Cirelli potted the winning tally exactly one minute later.