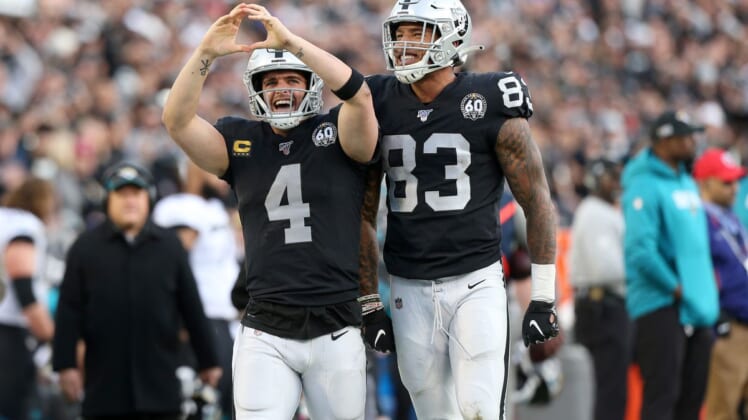 For the Las Vegas Raiders, the red zone numbers from a year ago are something everyone rather forget. This season the team is deeper and more talented at tight end which could finally help inside the 20-yard line.

On the list of fix-it offseason matters, one key area the Las Vegas Raiders must improve to increase their win total and make a serious run toward the playoffs is red zone efficiency. The Las Vegas offense has ranked 22nd in both seasons under head coach Jon Gruden which means it’s an on-going issue for the coach during his second tenure in the silver and black.

Fortunately, Gruden and general manager Mike Mayock have potential solutions at tight end – and they are numerous.

Despite Darren Waller’s breakout 2019 campaign, he only hauled in three touchdown receptions. The Raiders had a fair amount of opportunities to score, ranking 13th in red zone attempts.

Waller’s presence in the red zone could transform the offense into a high-octane machine.

Perhaps quarterback Derek Carr and Waller need to tune up their synchronization inside the 20-yard line. The wideout-turned-tight end discussed timing with Vic Tafur of The Athletic as players gathered together for informal practice sessions in Las Vegas.

“The quarterback gets a feel for how you do things against certain looks, and that only comes from repetition, trying new things and challenging yourself,” Waller said.

Waller’s presence in the red zone could transform the offense into a high-octane machine. He talked about the ceiling for this unit during a SiriusXM NFL Radio interview (h/t Scott Bair of NBC Sports Bay Area).

“The big thing for us is finishing in the red zone this year,” Waller said. “I know that we’re doing everything in our power to improve upon that. I don’t feel like having a top-five offense is out of the picture.”

To put Waller’s aspirations for the offense into perspective, the Raiders ranked 11th in yards and 24th in scoring. With a depleted pass-catching group, Carr and the running backs moved the ball between the 20-yard lines but sputtered while in striking distance.

If Carr and Waller develop their rapport in closed quarters, we could see the team’s top tight end reach the Pro Bowl or All-Pro ranks at the end of the 2020 campaign.

Waller doesn’t have to do all the heavy lifting at tight end in the passing game though. Hoku Curnan captured Foster Moreau moving well on the field:

In Week 14, against the Tennessee Titans, Moreau tore his ACL. Just six months from the injury, he looks ahead of schedule, which is a good sign for the offense. The LSU product quietly became a viable weapon in the red zone, ranking second on the team in receiving touchdowns (five).

Moreau secured 21 out of 25 targets for 174 yards. While that’s not a big number, Carr certainly trusted him in the red zone. If he’s able to suit up for the entire season, the Raiders tight end can consistently attack teams with two-tight end sets inside the 20-yard line.

Witten has at least 63 receptions in 15 out of his 16 seasons. Since 2014, he’s kept his catch rate above 71 percent. Carr’s accuracy coupled with the savvy veteran’s sure hands should pay dividends.

When Mayock and Gruden signed Jason Witten, the acquisition drew mixed reactions. On the surface, the former Cowboy seems “washed up.” He hasn’t made the Pro Bowl since 2017 and turned 38 years old in May.

On the other hand, he recorded 63 receptions for 529 yards and four touchdowns, tied as the Cowboys’ third-most targeted pass-catcher last season. He would’ve listed second in catches for the Raiders during the previous term. More importantly, the two-time All-Pro can still carve out some space to reach paydirt, which is a major plus for Gruden’s offense.

Witten has at least 63 receptions in 15 out of his 16 seasons. Since 2014, he’s kept his catch rate above 71 percent. Carr’s accuracy coupled with the savvy veteran’s sure hands should pay dividends for the Raiders tight end corps.

Waller made note of the vitality that Moreau and Witten brought to practices in Vegas, per Tafur.

“It was awesome to have Jason out there, and Foster has been having a pretty remarkable recovery, just being six months out or so,” Waller said. “It’s really exciting to have them both out there and adding their unique energy.”

Although some fans questioned whether Witten will make the final roster in September, he could easily secure a role as Gruden looks to roll out multiple Raiders tight end schemes, per Kyle Martin of the team’s official website.

Even with the new faces at wide receiver, Gruden won’t sway away from “old-school football.” He still wants to establish the run and use big bodies to pound defensive lines in the trenches. Waller, Moreau and Witten can all catch the football, so the Raiders can slip one of them out on a route for an easy catch as well.

Whether Gruden uses 13 personnel (one running back and three tight ends) or 22 personnel (two running backs and two tight ends), we’ll likely see a combination of Waller, Moreau and Witten on the field or all three in many scenarios.

Fortunately for Gruden, the Raiders tight end group may be tops in the league, featuring a talent on the rise (Waller), a probable future of Hall of Famer (Witten) and a balanced playmaker who’s a solid blocker and receiver at the position (Moreau).

Henry Ruggs III and a healthy Tyrell Williams will generate excitement, but don’t discount the Raiders’ trio of tight ends as the group to elevate this unit into top-10 scoring range.