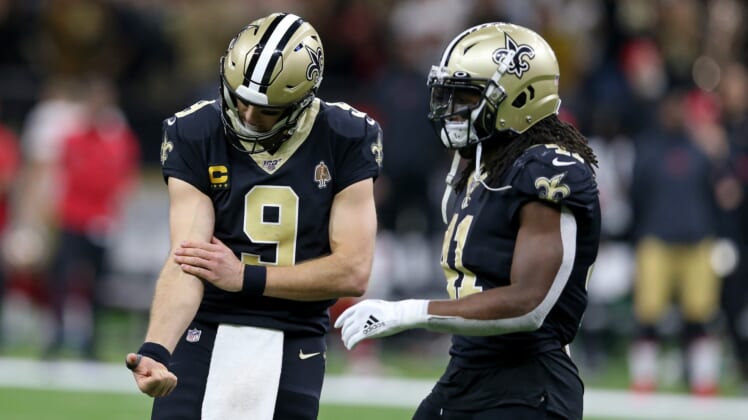 Dec 8, 2019; New Orleans, LA, USA; New Orleans Saints quarterback Drew Brees (9) looks at his right arm after being hit in the second half of their game against the San Francisco 49ers at the Mercedes-Benz Superdome. Saints running back Alvin Kamara (41) is at right. Mandatory Credit: Chuck Cook-USA TODAY Sports

The New Orleans Saints’ organization might want to do everything possible to keep the rift between future Hall of Fame quarterback Drew Brees and his teammates private, but the players apparently are not having it.

Earlier in the week, Brees indicated in an interview that he believes those using the national anthem as a way to protest police brutality and racial injustice are being disrespectful.

The comments were largely seen as tone-deaf just over a week after an unarmed African-American man by the name of George Floyd was murdered by a then-Minneapolis police officer.

Brees has received a ton of backlash. That included a fellow future Hall of Fame quarterback calling him out and further issues with both his teammates and the broader community in New Orleans.

Now comes this opinion from Saints linebacker Demario Davis. While he doesn’t specifically call out Mr. Brees, Davis takes a shot at those who are aligned with the quarterback when it comes to national anthem protests.

Specifically, the veteran linebacker is going after conservative Fox News host Laura Ingraham after she indicated that Brees has a right to a platform. This comes after the divisive television personality previously told LeBron James and others around the NBA to “shut up and dribble.” The optics are insane.

At this point it’s now yet known whether Brees can mend his relationship with fellow Saints players. He has apologized multiple times. However, Brees’ teammates are said to be incensed.

More than anything, it’s going to be interesting to see how this turns out from a pure football perspective.

If the 2020 NFL season starts on time amid the ongoing pandemic, it seems highly likely that several players will take part in pre-game protests. That will include some Saints players. How will Brees react and what could it mean for a Saints team that’s right up there with the San Francisco 49ers as the favorite to win the NFC?