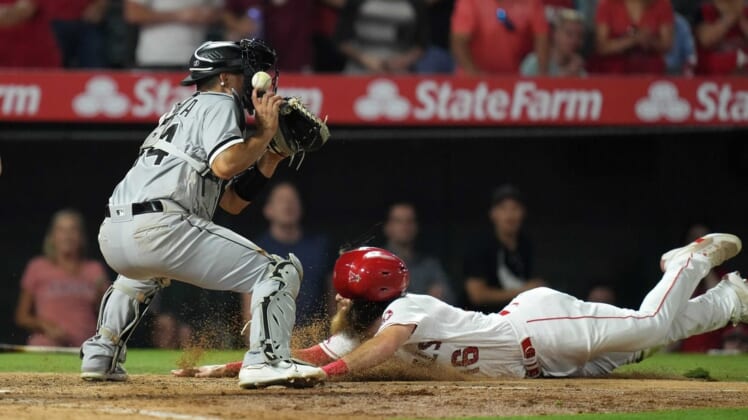 The Los Angeles Angels will host the Chicago White Sox on Tuesday night in Anaheim, Calif., without interim manager Phil Nevin for a second consecutive game.

Nevin was hit with a 10-game suspension Monday for his role in the fight between his club and the Seattle Mariners on Sunday. Nevin’s suspension was the longest among the 12 players and coaches from both teams who were suspended.

He decided not to appeal and began his suspension immediately, with bench coach Ray Montgomery named to handle the managerial duties in Nevin’s absence. Montgomery was given a two-game suspension as well, which he will serve next week.

Nevin watched Monday’s game against the White Sox — a 4-3 win — from a luxury suite behind home plate.

Tepera threw a scoreless eighth inning and Iglesias a scoreless ninth in Monday’s win over the White Sox.

Nevin spoke with reporters Monday afternoon before news of the suspensions were announced. He denied the assertion made by some of the Mariners that Wantz was used as an opener solely to retaliate for the pitch near Mike Trout’s head one day earlier.

“That’s not factual,” Nevin said. “But I don’t want to get into a war of words with that. What’s done is done. Yesterday’s over and done with. We’re focused on the White Sox today.”

Nevin became the Angels interim manager on June 7 when manager Joe Maddon was fired. The Angels are 8-11 under Nevin.

The Angels had not officially announced a starting pitcher for Tuesday’s game as of late Monday, but Chase Silseth (1-2, 4.96 in four starts with the Angels) is expected to be called up from Double-A Rocket City (Ala.) to make the start.

Johnny Cueto (1-4, 3.19 ERA) will be on the mound for Chicago, his eighth start of the season. He has just one victory in five starts in June despite pitching relatively well. Cueto has not allowed more than three earned runs in any of his June starts and has pitched into the sixth inning in four of five.

He has pitched well against the Angels in his career, going 4-0 with a 1.34 ERA in five starts.

The White Sox are hoping to get offensive production from 22-year-old rookie infielder Lenyn Sosa, who was called up from Double-A Birmingham after the season-ending knee injury to Danny Mendick. With the Barons, Sosa, who can play second, third and shortstop, was hitting .331 with 14 homers, 48 RBIs and a .933 OPS.

On Sunday, he got his first major league hit — a double — and went 1-for-3. He was 0-for-3 in Monday’s game against the Angels.

“For right now he’s going to help wherever he can,” White Sox manager Tony La Russa said. “But when you’re putting together the year he has, you’ve got to believe he’s going to be an everyday player. He’s been every day down there and he’s tearing the cover off the ball. The fact he can play three infield spots makes it easier.”