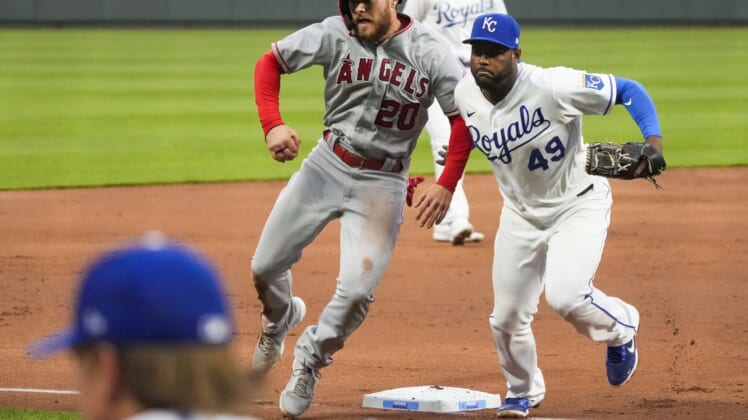 Angels starter Alex Cobb (1-0) struck out 10 while allowing three runs on four hits and a walk in 5 2/3 innings. He was almost unhittable early. All of his strikeouts came in the first five innings, most of them on his sinker. It was Cobb’s first double-digit strikeout game since 2014.

Mike Trout reached base for the 29th straight game dating back to 2020, hitting a home run in the ninth inning. The Angels have homered in all 10 games this season.

Brady Singer (0-2) pitched well for the Royals, but his defense betrayed him. He allowed four runs, just one earned, in five innings, yielding seven hits. Singer struck out six without issuing a walk.

Los Angeles got two unearned runs in the second inning. After Jared Walsh and Justin Upton opened the frame with singles, Jose Rojas hit a fly ball to medium-depth center. Both runners tagged and advanced. When Michael A. Taylor’s throw hit Walsh and rolled into foul territory, Walsh scored, and then Upton scored when Singer’s throw went past Perez.

The Angels scored their third run in the third on a double-play groundout by Ohtani.

In the fifth, Ohtani hit a two-out ground ball to shortstop Nicky Lopez, who couldn’t field it, allowing another unearned run to score.

The Royals finally got to Cobb in the sixth. Whit Merrifield lined a one-out double to right, and Andrew Benintendi walked. Perez’s 1,000th hit drove in the first run. After a groundout that advanced the runners, Steve Cishek replaced Cobb. Jorge Soler then flared a single to center, scoring Benintendi and Perez.

The Angels answered in the seventh. Ohtani hit a two-out, two-run double off the wall in right field. After two walks, Ohtain scored on a wild pitch.