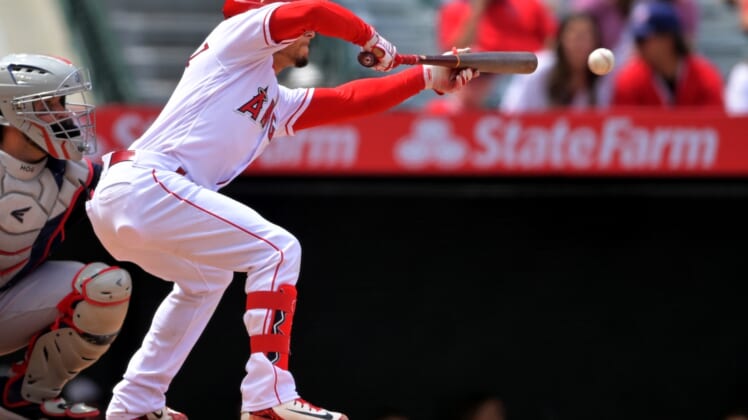 Defending American League MVP Shohei Ohtani got his first day off of the season, but the Los Angeles Angels didn’t miss a beat, beating the Cleveland Guardians 4-1 to complete a four-game sweep Thursday afternoon in Anaheim, Calif.

With Ohtani on the bench and Mike Trout getting a semi-day off as the designated hitter, the Angels offense was not as sharp as it has been of late. They had just six hits, including three by Brandon Marsh, but made the most of their opportunities. Leadoff hitter Taylor Ward drove in two runs and Tyler Wade scored twice.

The limited offense was enough because Los Angeles got another strong performance from its pitching staff. Starter Reid Detmers (1-1) gave up one run and two hits in five innings to get his first victory of the season. The bullpen came up big again, with four relievers combining for four scoreless innings.

Raisel Iglesias pitched the ninth for his fifth save in five chances this season.

The Guardians scored just seven runs in the four games, and five of them came on one game on Wednesday. They had four hits on Thursday, two of them by catcher Austin Hedges, who also drove in Cleveland’s only run of the game with a homer in the fifth inning.

Cleveland has dropped seven games in a row, all on the road as part of a 10-game road tip that continues at Oakland starting Friday.

The Angels got all they needed with three runs in the third inning, getting help from the Guardians’ defense, which committed two errors. Kurt Suzuki led off with a walk and was safe at second when Quantrill threw the ball away after fielding a comebacker by Wade.

Andrew Velazquez followed with a bunt, and he was safe at first on a fielding error by second baseman Owen Miller. That brought up Ward, who hit a grand slam on Wednesday. This time, he singled to drive in one run, and Marsh followed with an RBI single to make it 2-0.

The third run of the inning scored when Trout grounded into a double play.