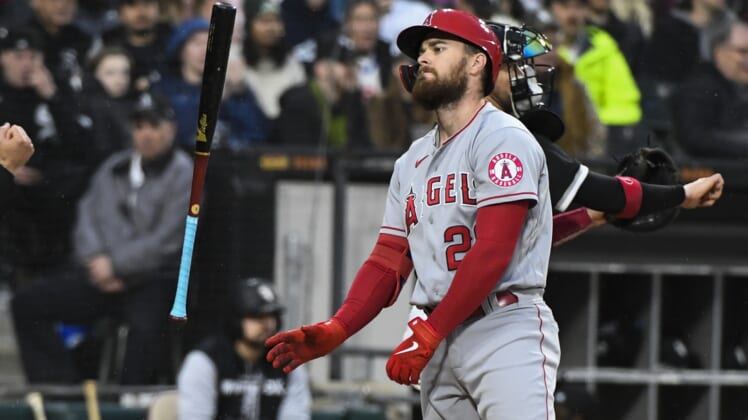 Taylor Ward homered on the second pitch of the game and finished with three hits, Shohei Ohtani also homered, and seven Angels pitchers combined on a three-hitter to lift Los Angeles to a 5-1 victory over the host Chicago White Sox on Friday.

The Angels showed resilience in stretching their winning streak to six games while sending the White Sox to their 10th loss in 11 games.

Los Angeles right-hander Noah Syndergaard was scratched from his scheduled start due to an undisclosed illness, prompting manager Joe Maddon to open the game with reliever Jimmy Herget, who allowed one run and one hit in three innings with two strikeouts.

Austin Warren (2-0) earned the victory with two innings of perfect relief. Raisel Iglesias entered with two on and one out in the ninth to pick up his sixth save, working around a walk that loaded the bases to retire Luis Robert on a flyout to end the game.

Chicago scored its lone run in the first inning, as Yasmani Grandal reached on an error by second baseman Matt Duffy that allowed Tim Anderson to score. Anderson had opened the inning with a double and had taken third on a groundout. Herget ended the inning by getting Jose Abreu to ground into a double play with the Angels still leading 2-1.

Los Angeles pitching continued to thrive after that, facing the minimum over each of the next five innings.

Ward drove in two runs while finishing a triple short of the cycle as Los Angeles out-hit Chicago 13-3.

Anthony Rendon, David Fletcher and Ohtani had two hits apiece for the Angels, with Rendon doubling home Ohtani from first base for a sixth-inning run. Jared Walsh hit an RBI double in the eighth for additional insurance, before Ward capped the scoring with a ninth-inning RBI double.

White Sox right-hander Lucas Giolito (0-1) gave up three runs and seven hits in a season-high six innings with one walk and seven strikeouts.

White Sox bench coach Miguel Cairo was ejected in the top of the ninth inning.