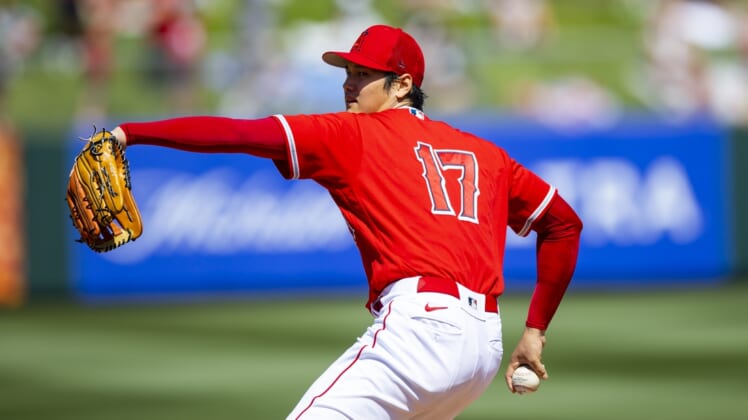 Angels two-way star Shohei Ohtani will make his first Opening Day start as a pitcher and will also serve as the designated hitter when Los Angeles opens the season against the Houston Astros on April 7 at Angel Stadium in Anaheim.

Ohtani, 27, was a unanimous American League MVP last season when he excelled at the plate and on the mound.

Angels manager Joe Maddon said Ohtani was reserved when the Opening Day assignment was broken to him.

“It was, ‘Well if I have to,’ something like that,” Maddon said of Ohtani’s reaction. “He’s self-deprecating. He’s got that kind of sense of humor. He’s a good man.”

Ohtani served as the starting pitcher for the American League in the All-Star Game and also started as the DH.

When Ohtani pitches this season, he will likely be able to remain in the game as the designated hitter after being removed as a pitcher. The proposed new rule — being dubbed the “Shohei Ohtani rule” — would allow any pitcher used as the DH to remain in the contest as a hitter.

Last season, the Angels had to forfeit the DH when Ohtani pitched and use pinch-hitters when the pitcher’s spot in the order came up.

“It’s wonderful news for us,” Maddon told reporters. “Obviously, you can make the argument he might be the only guy who actually gets to utilize that with any kind of consistency. But it’s deserved based on what he’s able to do. He’s a true two-way player. It just makes sense. Part of it is the allure of him and the fans in the ballpark.”