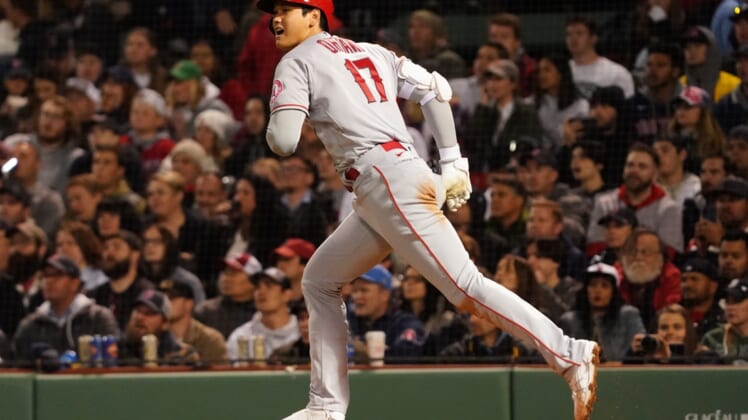 Two-way star and 2021 American League MVP Shohei Ohtani returns to the Los Angeles rotation when the visiting Angels conclude a three-game series against the Boston Red Sox on Thursday afternoon.

Ohtani (2-2, 4.19 ERA) had his fifth start of the season delayed after he suffered right groin tightness Sunday against the Chicago White Sox.

After pinch hitting on Monday, Ohtani slotted back into the starting lineup as a designated hitter during the first two games of the series in Boston.

Ohtani enters his first-ever start at Fenway Park having won back-to-back games. He pitched five innings of two-run ball on April 27 against Cleveland, a week after he struck out 12 Astros over six one-hit frames in Houston.

“When you have the chance to do something special at (storied venues like Fenway or Wrigley Field), it’s different,” Angels manager Joe Maddon said before Wednesday’s 10-5, 10-inning win over Boston. “It’s just different. It’s a shame that we don’t have more of the iconic ballparks still in place. … Shohei getting to do both here (on Thursday), it’s significant.”

As a pitcher, Ohtani is 1-1 and has allowed five earned runs over nine career innings (two starts) against the Red Sox. His only outing before last July was in 2018.

The Red Sox will turn to Rich Hill (0-1, 3.71) in hopes of righting the ship after the team’s fifth loss in as many extra-inning games this season.

“We have to do a better job in close games,” said Sox manager Alex Cora, whose team has played in more extra-inning games than any in MLB. “Good teams do that. So far we haven’t done that.”

“The last few games have been a little slow, so we’re just trying to pick it up,” Ward told Bally Sports West. “But we’re a good ballclub. This might be what we need (going into Thursday).”

Cora recently suggested that Tanner Houck would piggyback Hill for a second straight time. Hill was pulled Friday in Baltimore despite working four scoreless, one-hit innings on only 50 pitches.

“I haven’t seen somebody look at me that way in a while,” Cora said of Hill’s displeased reaction. “But he understands. … I bet he knew where we were heading into the game knowing Tanner was here, but at the same time, you get so locked into what you’re doing that you actually forget.”

Hill has pitched scoreless ball in consecutive four-inning starts, but he is still looking for a win this season. His most recent effort stood out to teammates.

“That’s classic Rich Hill right there,” Sox infielder Christian Arroyo said. “(I’ve had) the opportunity to talk with Rich a lot and he’s just a competitor. It’s easy to see why he’s still pitching at the age he is and why he’s still succeeding. For him to come out, that start was huge.”

The veteran left-hander has faced the Angels eight times in his career with only two starts, the last one in 2017. He has allowed nine runs and 10 hits over 12 1/3 innings in those two starts.