Angels optimistic Mike Trout will return for finale vs. Marlins 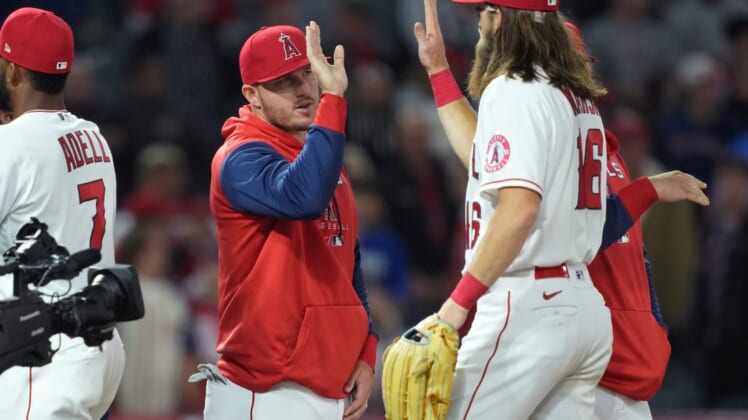 Mike Trout is expected back in the lineup for the Los Angeles Angels on Tuesday when they host the Miami Marlins in the finale of a two-game interleague series.

Even so, the fact that he was not in the starting lineup Monday as the Angels won 6-2 might worry fans of the three-time MVP considering what happened last season.

Trout played in only 36 games in 2021 because of a strained right calf muscle, with his season ending on May 17.

He sat out Monday because of a “stomach bug.” However, it is not necessarily disconnected from other potential injuries because a stomach issue could result in dehydration, making him more susceptible to muscle pulls and strains.

“You’re always concerned about that,” Angels trainer Mike Frostad said. “With his history of soft-tissue injuries, we just want to be cautious with him. It’s early in the year, and we don’t want to run the risk of having somebody go down with a soft-tissue injury at this point of the season.”

Trout went 3-for-13 with a home run as Los Angeles dropped three of four in its season-opening series against the Houston Astros. Brandon Marsh was moved to center field on Monday after Angels manager Joe Maddon learned that Trout wasn’t feeling great.

Marsh and Jo Adell each had a homer and an RBI double in the Angels’ victory.

Maddon said of Trout and his ailment, “He was out there doing his (pregame) work and trying to fight through a couple of things when I got wind of it, so I went outside to talk with him, and we went over the whole thing, you know, what’s the best thing to do right now? It’s game five. Let’s just be smart about this.”

The Marlins also had a late scratch Monday, with Avisail Garcia sitting out because of back tenderness. He was originally in the lineup as the designated hitter in the cleanup spot. Garcia is listed as day-to-day.

Left-hander Patrick Sandoval, who was 3-6 with a 3.62 ERA in 17 games (14 starts) last season, will take the mound Tuesday in his season debut for Los Angeles. He has never faced the Marlins.

Lefty Jesus Luzardo will make his first appearance of the season for Miami. He went a combined 6-9 with a 6.91 ERA in 25 games (18 starts) last year pitching for Oakland and Miami, coming to the Marlins in the trade-deadline deal that sent Starling Marte to the A’s.

For Luzardo, the trade was a homecoming of sorts, as he attended high school in Parkland, Fla. However, he struggled for the Marlins, going 4-5 with a 6.44 ERA in 12 starts.

“I think it’s tough for guys coming into a new team — that’s hard, and then come into your hometown,” Marlins manager Don Mattingly said. “People always say, ‘It’ll be great to play in your hometown.’ I’m not so sure about that. Now you got everybody you know, if you’re not doing so well, they’re all telling you about everything that’s going wrong, ‘You did this in high school, you did that when you were playing Little League.’

“You don’t necessarily need all those voices, so that can be a little distracting, I think. I’m sure he’s going to be good at tuning out what he needs to tune out. We just look for consistency out of Jesus.”

Luzardo is 0-0 with a 1.50 ERA in four career appearances vs. the Angels, all in relief.