Angels might be without Shohei Ohtani vs. Blue Jays 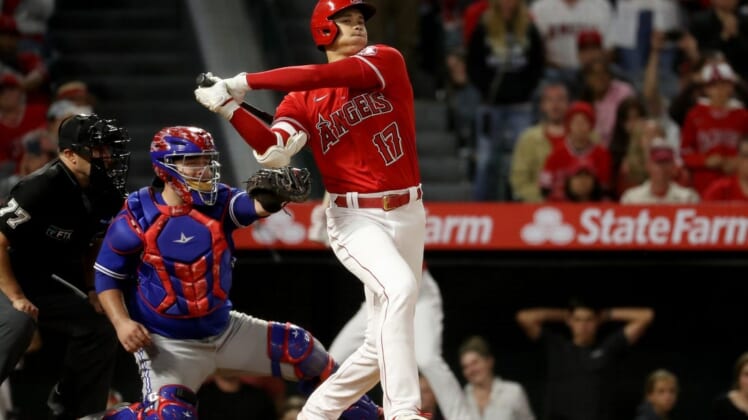 The Los Angeles Angels and Toronto Blue Jays will meet Saturday night in Anaheim, Calif., in the third game of a four-game series, but Angels star Shohei Ohtani might not be in the lineup because of a stiff back.

Ohtani, the reigning American League Most Valuable Player, wasn’t in the starting lineup Friday for only the second time in the Angels’ 47 games this season, although he did pinch hit, striking out to end the Blue Jays’ 4-3 victory.

Ohtani, whose last day off was April 28, said he felt his back tighten while throwing a pitch in the first inning to Toronto’s Vladimir Guerrero Jr. on Thursday. Ohtani remained in the game and threw six innings, striking out 10, but he gave up five runs and took the loss. His fastball velocity was slightly down. He also was lifted for a pinch hitter in the eighth inning.

“I don’t think it’s a big issue,” Ohtani said through an interpreter. “But we’ll have to wait to see how it feels. I’d definitely say my back (caused the decrease in velocity). I was able to get a bunch of strikeouts, but I wasn’t pitching at my full strength.”

While former Angels manager Mike Scioscia was more cautious with Ohtani when it came to his playing time, current manager Joe Maddon mostly has let Ohtani decide for himself if he needs a break.

However, both Maddon and Ohtani said they believe the back soreness isn’t a result of fatigue.

“It’s hard to say, but since I felt it on one certain pitch, I’m thinking it’s not really fatigue,” Ohtani said. “It might have been something to do with my mechanics.”

Besides getting the loss on the mound Thursday, Ohtani went 0-for-2 at the plate, with a walk. He is batting .247 this season, with nine homers and 29 RBIs.

“He has a stiff back, but it’s nothing serious, so I didn’t want to push him right there,” Maddon said of lifting Ohtani for a pinch hitter on Thursday. “I’m not picking up on fatigue. Nobody’s perfect. He just did not have one of his better nights.”

On Saturday, right-hander Michael Lorenzen (5-2, 3.05 ERA) will make his eighth start of the season for the Angels after impressive back-to-back performances, both against the Oakland A’s.

On May 14, he held the A’s to one run and five hits in seven innings. Then, last Saturday, he shut out the A’s over six innings, giving up just three hits. He has made one career appearance against the Blue Jays, throwing three scoreless innings of relief in a game in 2017.

Left-hander Yusei Kikuchi (2-1, 3.47) will be on the mound for Toronto on Saturday, his ninth start of the season. He is 2-0 with a 2.08 ERA in four starts in May. A lot of his success, he says, is his increased use and confidence in his four-seam fastball.

“I’m just gaining more and more confidence in that pitch every outing,” Kikuchi said through an interpreter. “The numbers that I see back that up. That pitch is a very good pitch. And I feel that as well, out on the mound, the more I throw it, the more I see how hitters are reacting to that pitch. It just gives me more confidence.”

Kikuchi has struggled against the Angels in his career, going 1-4 with a 10.92 ERA in seven starts.