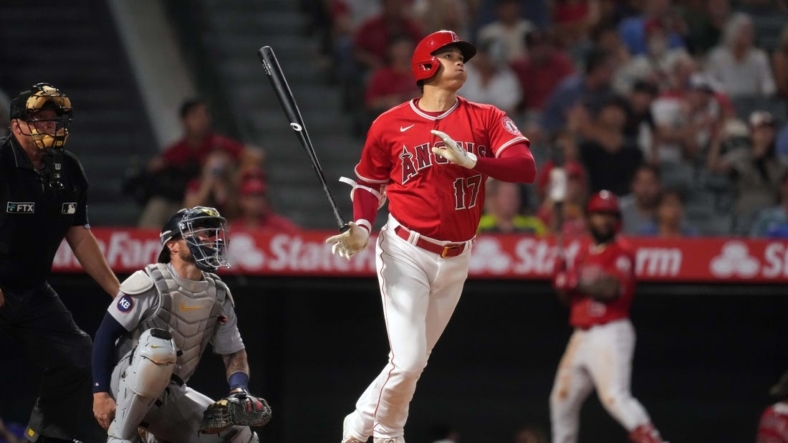 Magneuris Sierra laid down a perfect safety-squeeze bunt to score Andrew Velazquez from third base in the 10th inning, lifting the Los Angeles Angels to a 5-4 victory over the Detroit Tigers on Tuesday in Anaheim, Calif.

The Tigers took a 4-3 lead in the top of the 10th on an RBI single by shortstop Javier Baez, who drove in three runs on the night.

However, Baez’s throwing error in the bottom of the 10th allowed the Angels’ Taylor Ward to score from third and tie the game at 4-4. Velazquez, who reached second on the play, took third on a wild pitch by Tigers reliever Andrew Chafin (1-3).

Ryan Tepera (4-2) pitched two innings and got the victory despite giving up the run in a top of the 10th.

Tigers starter Eduardo Rodriguez began the game by retiring David Fletcher on a liner to left field, but Mike Trout then hit the first pitch he saw from Rodriguez over the fence in left field for his 31st home run of the season.

Trout has homered in three consecutive games and has seven homers in his past 13 games.

Rodriguez gave up two more homers in the second inning when Mike Ford and Jo Adell went deep back-to-back, but the left-hander settled in from there. He blanked the Angels over the remainder of his seven-inning outing.

After allowing a one-out double to Ward in the fourth, Rodriguez retired the next 11 hitters in a row to complete his evening. In all, he allowed three runs on five hits, striking out four and walking none while making 90 pitches.

Angels starter Mike Mayers held the Tigers scoreless through three innings before Detroit broke through in the fourth. Baez singled with one out, went to second on a groundout by Harold Castro and scored on a single by Spencer Torkelson to cut the deficit to 3-1.

In the sixth inning, Detroit’s Willi Castro hit a leadoff double, who took third on a wild pitch and scored on a groundout by Baez to make it 3-2. That ended the night for Mayers, who gave up two runs on four hits and one walk while striking out three in 5 2/3 innings.

The Tigers tied the game at 3-3 in the eighth when Willi Castro was hit by a pitch with one out, went to third on a double by Victor Reyes and scored on Baez’s infield grounder.