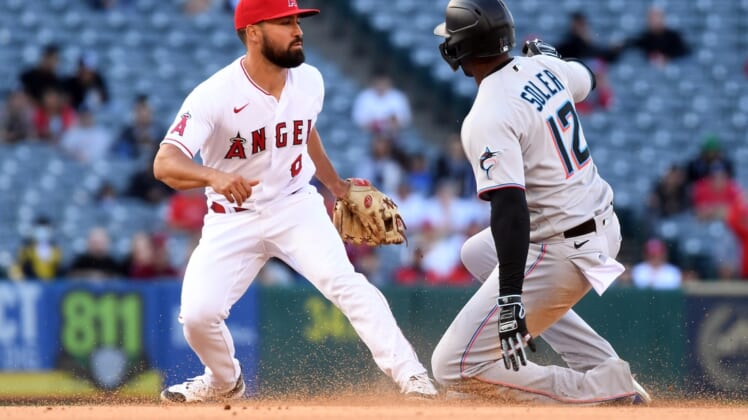 Tyler Wade scored from third base on Max Stassi’s infield grounder in the bottom of the ninth inning, lifting the Los Angeles Angels to a 4-3 win over the Miami Marlins on Tuesday in Anaheim, Calif.

The Angels’ Anthony Rendon (sixth inning) and the Marlins’ Jazz Chisholm Jr. (seventh inning) matched each other with two-run homers to make the score 3-3, setting up the hosts’ opportunity in the ninth inning.

With one out, Jack Mayfield walked against Marlins reliever Anthony Bender (0-1). Wade, pinch-running for Mayfield, entered the game and immediately stole second. Replays appeared to show Wade slid past the bag and was tagged out, but the Marlins’ challenge was unsuccessful.

Wade then took third on a wild pitch. He scored when shortstop Miguel Rojas, playing in on the infield grass, could not come up cleanly with Stassi’s grounder, allowing Wade to score easily.

Raisel Iglesias (1-0) got the victory with a scoreless ninth as Los Angeles swept the two-game interleague series.

Angels starter Patrick Sandoval walked the bases loaded in the second inning before working his way out of the jam.

Sandoval retired the first two batters in the third inning before giving up back-to-back singles to Garrett Cooper and Bryan De La Cruz. The second hit skipped Angels right fielder Jo Adell for an error, allowing Cooper to score all the way from first and give the Marlins a 1-0 lead.

Sandoval was finished after four innings and 71 pitches, having allowed one unearned run on three hits and three walks while striking out six.

Marlins starter Jesus Luzardo kept the Angels off the scoreboard until the fourth when Mike Trout walked, went to second on a wild pitch and scored on Mayfield’s triple into the right field corner.

Luzardo, though, was able to work his way out of further damage, stranding Mayfield at third by striking out Stassi and Matt Duffy. The Angels thought Duffy checked his swing on strike three, and ultimately Angels hitting coach Jeremy Reed was ejected by plate umpire Alfonso Marquez for arguing.

Luzardo got a no-decision after five strong innings. He gave up one run on two hits and one walk while striking out 12.