Angels desperate to end 10-game skid in finale vs. Phils 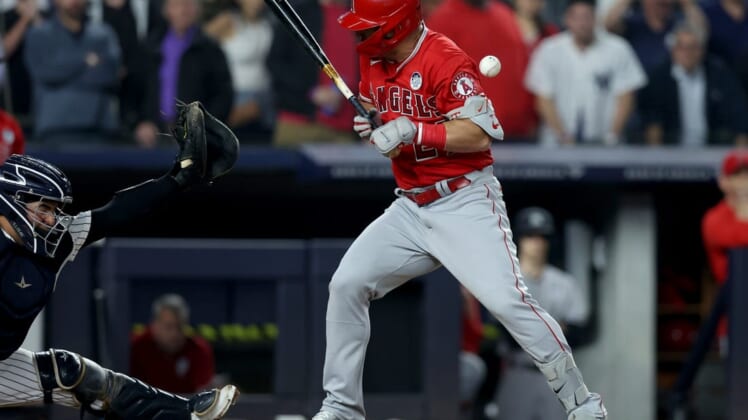 It was the Philadelphia Phillies who fired their manager just a couple of days ago, but it is the Los Angeles Angels that have hit the skids following a promising start to the season.

When the Phillies and Angels meet for the finale of their three-game series Sunday afternoon in Philadelphia, it is the Angels who are looking to end a 10-game losing streak, the team’s longest since an 11-game slide in 2016.

The club record for consecutive losses is 13, a skid that began Sept. 19, 1988, and continued into the following season.

The Angels’ offense has averaged just 2.8 runs per game during the slide (28 runs in 10 games), and that includes one game in which Los Angeles scored 10 runs.

To make matters worse for the Angels, Mike Trout is in the biggest slump of his career. He went 0-for-4 with three strikeouts on Saturday and is hitless in his past 23 at-bats, his longest hitless streak.

During the club’s losing streak, Trout is hitting .103 (4-for-39) with one homer and 16 strikeouts. Three of the hits came in one game.

“I think he might be trying to put the whole team on his back a little too much,” Angels manager Joe Maddon said. “I want him to just be Mike Trout, go play. He’s trying a bit too hard. That’s how I see it.

“He’s one of the leaders of the team. He wants it to be right. He wants to get us there. He’s a very accountable human being. He’s all of these different things, and I think he might be trying to carry the team.”

The Angels also are missing one of their best hitters of the year, right fielder Taylor Ward, who is day-to-day with a strained hamstring.

Left-hander Patrick Sandoval (3-1, 2.70 ERA) will be on the mound on Saturday for Los Angeles to make his ninth start of the season. He is coming off his worst start of the year on May 29, when he gave up six runs (five earned) and five hits in three innings. He has never faced the Phillies.

Right-hander Kyle Gibson (3-2, 3.83 ERA) will be on the mound for Philadelphia, his 11th start of the season. He hasn’t won in his past four starts, but he hasn’t pitched all that badly — he gave up more than two runs in a game only once in that span.

The Phillies will look for their third straight win since firing manager Joe Girardi and promoting bench coach Rob Thomson as the club’s manager.

“He’s been around the game for a long time,” Phillies DH Bryce Harper said of Thomson. “He’s been around winning teams and winning managers as well, like Joe Girardi, right? He’s been in this organization for five years now. He knows the ins and outs. He brings that new voice, maybe he’s more open now since he is the manager and not the bench coach. I think we’ll see more out of him.”

Philadelphia will look to keep the offense rolling after consecutive high-scoring wins over Los Angeles, 10-0 on Friday and 7-2 on Saturday. Johan Camargo had a pair of two-run singles in the latest victory, and J.T. Realmuto had three doubles and two RBIs.