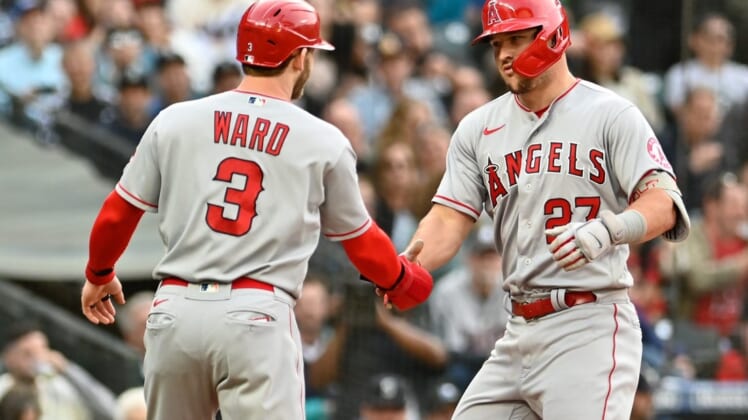 Ohtani (5-4), the reigning American League MVP, allowed just three hits, walked two and struck out six. He went 2 for 4 at the plate.

Raisel Iglesias pitched the ninth for his 13th save.

It was just the third win in the past 21 games for the Angels, a streak that includes a franchise-record 14-game skid.

The Mariners dropped to 2-5 on their 11-game homestand.

After walking Trout with one out in the first, Kirby retired seven consecutive batters until Taylor Ward lined a two-out single to right in the third. Trout followed by hitting a pitch into the first row of seats in right field to make it 2-0.

The Angels doubled their advantage in the seventh against veteran Sergio Romo with another two-out rally. Ward lined a single to right and Trout followed with a shot to center, his 18th home run of the season.

It was Trout’s 49th career homer in 168 games against the Mariners and his 30th at T-Mobile Park, the most he’s hit against any opposing team and at a visiting stadium.

Ohtani struggled early with his command. With two outs in the first, Jesse Winker walked and Eugenio Suarez hit a broken-bat single to center. Ohtani threw a wild pitch to advance both runners. But he got Cal Raleigh to ground out to first baseman Jared Walsh to end the threat.

The only other hits the Mariners got off Ohtani were a two-out single by Adam Frazier in the second and a leadoff single by Suarez in the fourth.

The Mariners finally scored in the eighth off Ryan Tepera. Dylan Moore was hit by a pitch leading off and J.P. Crawford followed with a run-scoring double into the right-field corner. Crawford was stranded there.

Trout came up with two outs and two on in the ninth, but struck out on a Matt Festa fastball at the top of the zone.