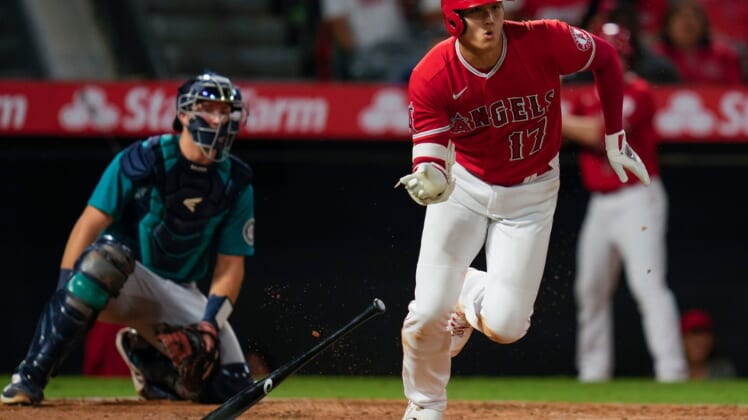 Shohei Ohtani hit two run-scoring triples and walked with the bases loaded as the Los Angeles Angels put a crimp in the Seattle Mariners’ postseason hopes with a 14-1 blowout Saturday night in Anaheim, Calif.

Luis Rengifo homered and Phil Gosselin and Jared Walsh each drove in four runs for the Angels (74-81), who won for just the second time in their past nine games.

The Mariners (85-70) had their season-high six-game winning streak snapped and fell three games behind both Boston and the New York Yankees in the chase for the American League’s two wild-card playoff berths. Toronto is two games behind those teams.

The Angels put this one away early, sending 13 batters to the plate in an eight-run third to make it 11-1.

The Mariners, who walked Ohtani four times in five plate appearances Friday night, including an intentional pass with a one-run lead and nobody on base in the bottom of the ninth inning, decided to pitch to him Saturday. That turned out to be a mistake.

After Brandon Marsh led off the bottom of the first with a single, Ohtani hit a triple to right. He scored on Gosselin’s groundout.

Rengifo hit a solo shot with two outs in the second off Mariners left-hander Tyler Anderson (7-10), who allowed nine runs in a season-low two-plus innings.

Just like in the first, Marsh led off the third with a single and Ohtani tripled to right. Gosselin singled to make it 5-1. After a single by Jack Mayfield and a walk to Max Stassi, Walsh lined a two-run single to right. That was it for Anderson, but not the Angels.

With two outs and the bases loaded, Marsh was hit by a pitch from right-hander Yohan Ramirez, and Ohtani walked on a 3-2 pitch to make it 9-1. Gosselin lined a two-run single to center to cap the inning.