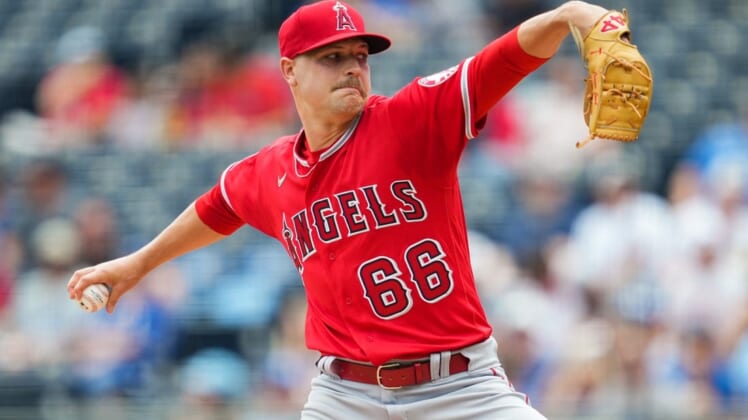 Following Tuesday’s 6-0 win, the Angels have now won two consecutive games for the first time since wins over the Seattle Mariners and Chicago White Sox on June 26 and 27.

Junk, who was lifted after issuing a leadoff walk to begin the sixth inning, earned his first career major league win after going winless in four major league starts last season and one relief appearance this year.

He struck out a career-best eight batters while allowing only the one walk and four hits while making 86 pitches.

It was the third time this season the Angels pitching staff has thrown shutouts in back-to-back games, and Wednesday was the club’s 12th shutout overall.

Royals starter Brad Keller (5-11) was perfect through three innings and allowed only a walk to Shohei Ohtani through four.

But leading off the fifth, the Angels got their first hit of the game on a double by Suzuki. One out later, Gosselin followed with an RBI triple and Marsh singled home Gosselin for a 2-0 Angels lead.

Junk, meanwhile, allowed only one Royals baserunner to get into scoring position through five innings. He walked Whit Merrifield leading off the sixth and was removed from the game by Angels interim manager Phil Nevin.

Keller was able to stick around until the seventh, but when Marsh led off the inning with a triple, he was done for the day. In six-plus innings, Keller gave up three runs on six hits and three walks, striking out five and making 90 pitches.

Andrew Velazquez followed Marsh’s triple with an infield single to drive in a run, and Ohtani added an RBI single later in the inning for a 4-0 Angels lead.