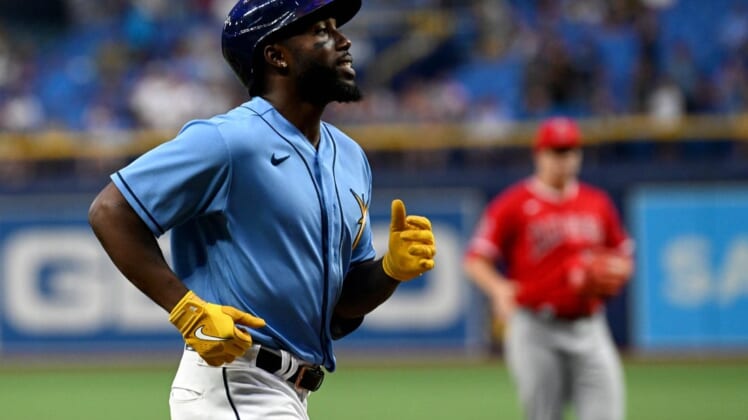 The Tampa Bay Rays have won their past three series, and the play of Randy Arozarena has them hunting down a fourth.

The Rays edged the Los Angeles Angels 2-1 on Monday in the opener of a four-game series at St. Petersburg, Fla. The teams meet again on Tuesday.

In a 1-1 game in the fifth inning on Monday, Arozarena blasted a solo shot to give Tampa Bay the decisive run. The Rays moved to the top of the American League wild-card standings by a half-game over both the Toronto Blue Jays and the Seattle Mariners.

Tampa Bay moved to 11 games over .500, matching its best mark of the season.

Arozarena, who finished 2-for-3 with a walk, has five homers in his past 12 games. He leads the AL with 18 RBIs in August.

“Now if we can get the guys in front of him — they don’t have to get hot, just get on base,” Rays manager Kevin Cash quipped.

Angels interim manager Phil Nevin said of Arozarena, “He’s swinging the bat good, and believe me, I’ve seen it a lot. (I have) nightmares from a couple of years ago. … He goes on these runs at the end of the year and he’s pretty tough to pitch to.”

Kluber has made nine career starts against the Angels, posting a 3-3 record with a 4.97 ERA. Los Angeles has socked nine homers and batted .245 against him in 54 1/3 innings.

His most recent matchup with the Angels, on May 10, was forgettable for him but a career highlight for Los Angeles rookie left-hander Reid Detmers.

In just three innings — tied for his shortest start of the year — Kluber surrendered eight runs on 11 hits, with Mike Trout and Chad Wallach taking him deep. Meanwhile, Detmers closed out the 12-0 win by firing a no-hitter.

The Angels have had few moments to savor since then.

On Monday, they stranded nine baserunners, going 1-for-6 with runners in scoring position.

“They’re doing all their work,” Nevin said of his batters, according to the Orange County Register. “The hitting (coaches) are doing all they can with everybody.

“(The Rays) pitched us well tonight, as well. These guys are really good at game-planning and pitching to guys. We had a couple of matchups we liked and just didn’t (go) our way.”

The Angels will counter Kluber with Jose Suarez (4-5, 4.12 ERA). The left-hander has made one start and one relief appearance against Tampa Bay in his career, going 1-1 with a 5.14 ERA.