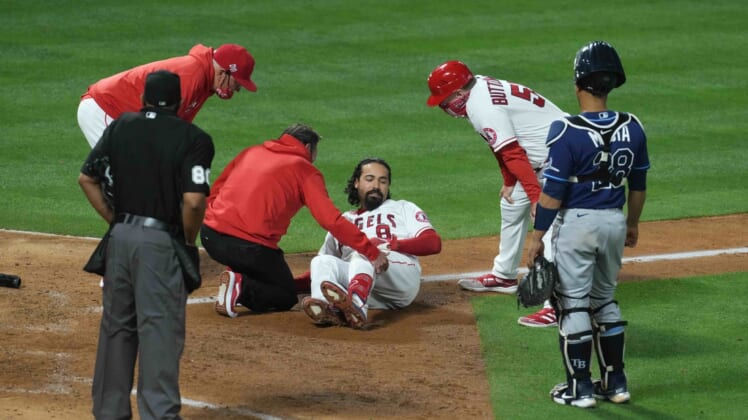 Angels third baseman Anthony Rendon left Los Angeles’ Monday loss to the Tampa Bay Rays in the eighth inning when he fouled a pitch off his left knee in Anaheim, Calif.

The team announced postgame that X-rays were negative, and Rendon is listed as day-to-day with a bruised knee.

Rendon, who hit his third home run of the season, a solo shot off Tyler Glasnow, in the sixth inning, was unable to complete his plate appearance in the eighth and was helped into the dugout. Scott Schebler struck out to end the inning.

In the top of the ninth inning, Angels first baseman Albert Pujols moved from first base to third base. Pujols played third base semi-regularly early in his career while with the St. Louis Cardinals, but he hadn’t been at that spot since a one-inning appearance in 2019.

Rendon is hitting .276 with a .358 on-base percentage and a .466 slugging percentage. With his home run on Monday, he has 11 RBIs. It was only his 15th game of the season, as he missed two weeks with a groin injury.

In his nine-year career, the last two with the Angels after seven with the Washington Nationals, Rendon owns a .290 average with a .372 on-base percentage, a .490 slugging percentage, 148 home runs and 588 RBIs.