Angels aim to take rubber match of series vs. Astros 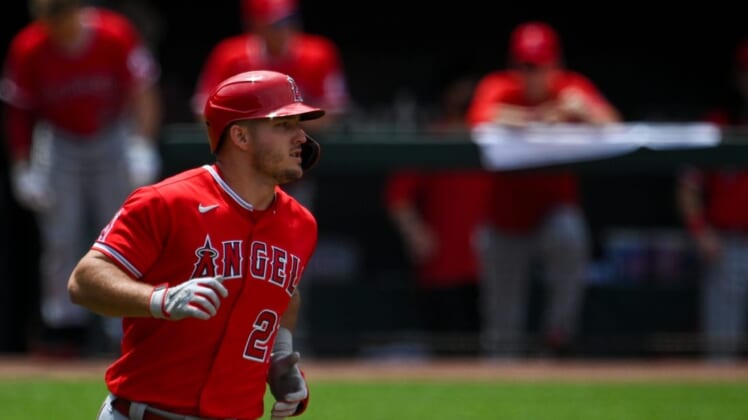 Mike Trout’s status for Thursday night’s series finale between the host Los Angeles Angels and Houston Astros is in question because of the center fielder’s sore back.

The All-Star, however, is expected to be in the lineup for the Angels on Friday and Saturday against the Los Angeles Dodgers.

Trout had to leave Tuesday’s game against the Astros in the fifth inning because of back spasms. He was not in Wednesday’s lineup; however, he was available to pinch hit. Trout, though, was not needed because the Angels snapped a five-game skid with 7-1 win over the Astros in Anaheim, Calif.

Trout had an MRI exam and CT scan Wednesday, both of which came back showing no sign of a serious injury.

“I feel a lot better than (Tuesday) night,” Trout said. “It just spasmed up on me and wasn’t getting any better. But it feels better and I’m getting treatment.

“I’ve been dealing with it for a little bit now. Just trying to calm it down every day at the ballpark. It just got to a point where it was bothering me and was really uncomfortable.”

Adell has been up and down with the big club the last few years, including this season, but was hitting well for the Bees. He started in right field Wednesday and went 2-for-5 with an RBI.

Valdez has been good all season, currently with a streak of 14 consecutive quality starts. As a result, he’s a first-time All-Star and one of five Astros named to the team.

“I’ve just worked really hard for this,” Valdez said through an interpreter. “I’ve tried working tirelessly for this, tried focusing on the game a lot more, and just trying to have quality outings every single time I went out there, so today I could be an All-Star.”

Said Astros manager Dusty Baker: “He’s really getting mature as far as refocusing. He’s come a long way since I first got here.”