Estonia’s Anett Kontaveit, the eighth and final player to qualify for the WTA Finals, is headed to the event’s championship match in Guadalajara, Mexico.

Kontaveit topped fourth-seeded Maria Sakkari of Greece 6-1, 3-6, 6-3 in the semifinals on Tuesday. Her final-round opponent will be sixth-seeded Garbine Muguruza, who defeated seventh-seeded Paula Badosa 6-3, 6-3 in an all-Spanish semifinal.

Kontaveit outplayed Sakkari by recording far more winners (32-17) and just a few more unforced errors (34-31). Sakkari briefly was ahead in the final set, breaking serve for a 3-2 lead, but Kontaveit captured the next four games to seal the match. 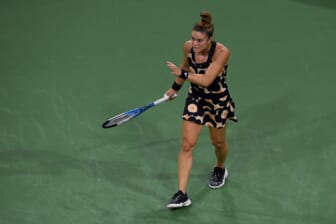 The victory was the 48th of the year for Kontaveit, the top total on the WTA Tour.

In the earlier match, Muguruza became the first Spanish player to reach the WTA Finals’ championship round since Arantxa Sanchez Vicario was runner-up to Germany’s Steffi Graf in 1993.

Muguruza, the 2016 French Open and 2017 Wimbledon winner, saved all three of Badosa’s break points while converting three of her 11 break opportunities. Badosa finished with more winners (20-17) and more unforced errors (30-21).

“I think it’s the best match that I played so far here in Guadalajara,” Muguruza said. “It was a tough match facing another Spaniard in the semifinals. … We’ve never faced each other before, so it was tricky, but I’m very happy that I got the win.

“Very proud of Paula. She started the year far in the rankings, and now she’s a Top 10 player. Very impressive. … Very happy for her year.”

Badosa said learning to be a top player, “It was very new for me, all these situations, being in these rounds, playing in front of a lot of people. Everything was really big at the beginning of the season, having these results. I think now I quite feel it’s more normal and I’m getting used to it. I think that will help me for next year as well if I want to do big things.”