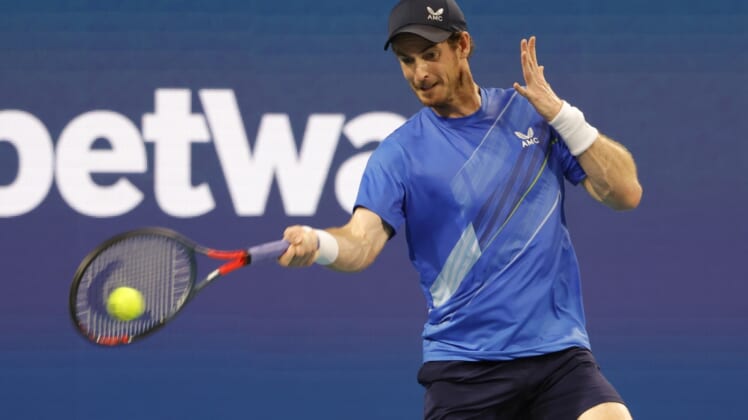 Great Britain’s Andy Murray formerly held the No. 1 ranking in the world. Now, he will go up against the most recent player to vacate the top spot.

The 34-year-old Murray, now ranked 85th, posted a 7-6 (4), 6-1 win over Federico Delbonis of Argentina on Thursday in first-round action at the Miami Open. Murray needed one hour, 33 minutes to seal the victory and advance to the round of 64.

Next, Murray will take on the tournament’s top seed, Daniil Medvedev of Russia. Medvedev fell to No. 2 in the world after losing in the third round at Indian Wells last week. Murray and Medvedev have faced each other once before, in 2019 in Brisbane, where Medvedev won in straight sets.

“Obviously a tough match,” Murray said when asked about his upcoming opponent. “He’s played extremely well on the hard courts the last few seasons. He deserves to be right up there at the top of the game.

“It’ll be a big challenge for me. It’ll be a great test. I’ve got a big training block after this tournament, and it’ll be a really good test for where my game’s at and things I need to work on as well against him. So I’m looking forward to that.”

Against Delbonis, Murray weathered a difficult first set and found his groove in the second.

“Both of us served very well in the first set,” Murray said. “I just managed to catch a really good return there at 5-4 in the tie-break, a really deep return and managed to get that point. He double faulted on the set point and that was the key to the match right there.”

Americans Sebastian Korda and Tommy Paul also advanced with victories in the opening round. Korda cruised to a 6-1, 6-1 win over Alejandro Davidovich Fokina of Spain, and Paul posted a 6-4, 6-4 win over Benjamin Bonzi of France.

Jordan Thompson of Australia also advanced, overcoming an early setback to post a 6-7 (1), 6-4, 6-4 win over Jo-Wilfried Tsonga of France.