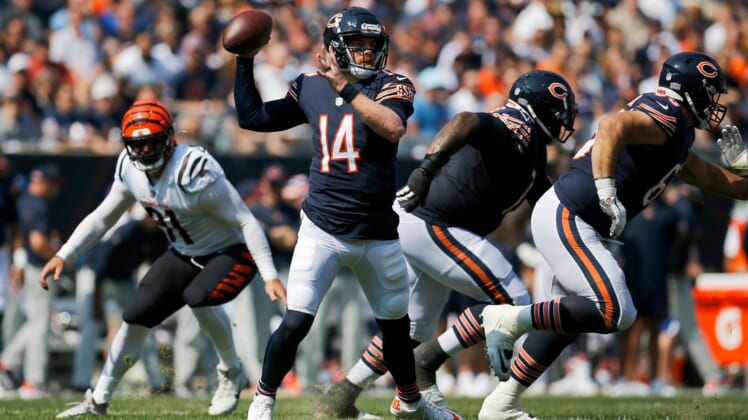 Andy Dalton was listed as questionable due to his ailing knee on Friday, and Chicago Bears coach Matt Nagy said a decision on a starting quarterback won’t be made until close to kickoff against the visiting Detroit Lions on Sunday.

Dalton was a limited practice participant and Nagy’s decision to not name a starter indicates a willingness to give Dalton time to recover. If Dalton can’t play Sunday, rookie Justin Fields will start.

“Andy is getting better each day and we’re going to see where he’s at on Sunday,” Bears coach Matt Nagy told reporters after practice.

Dalton sustained a bone bruise on his left knee during a Week 2 win over the Cincinnati Bengals and missed last week’s 26-6 loss to the Cleveland Browns.

Dalton said he is making progress but was short on details when it came to his practice workload on Friday.

“With the injury, you’re just trying to get back as soon as possible,” Dalton said. “I feel really good about where I’m at. …

“I did some things (in practice) and felt good about where I was and everything. I’m going to leave it at that.”

The 33-year-old Dalton is in first season with the Bears and has completed 73.5 percent of his throws for 262 yards, one touchdown and one interception.

Fields, the No. 11 overall pick in the 2021 draft, started against the Browns and it didn’t go well. He completed 6 of 20 passes for 68 yards but gave 67 yards back on nine sacks. Chicago had 47 yards of total offense.

Overall, Fields is just 14-of-35 passing (40 percent) for 138 yards and one interception in three games.

“Last week wasn’t the performance we want to put out,” Fields said on Friday. “We talked about that and we expect to be better this week.”

Among other injuries, star outside linebacker Khalil Mack (foot) returned to practice on a limited basis after missing the previous two days. Mack is listed as questionable, along with cornerback Xavier Crawford (back) and receiver Darnell Mooney (groin).