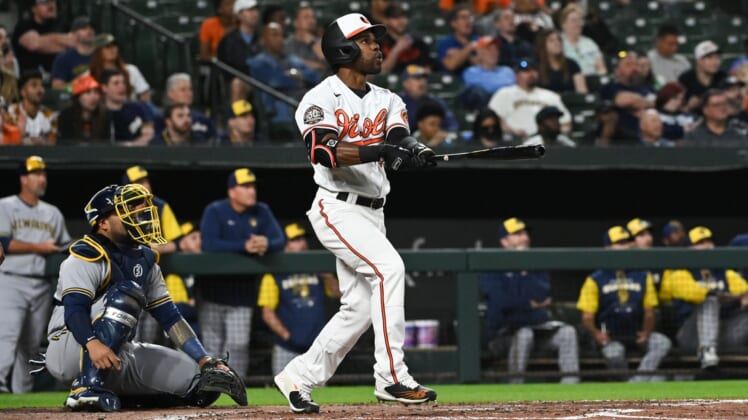 Andrew McCutchen drove in three runs on two hits to fuel the visiting Milwaukee Brewers to a 5-4 victory over the Baltimore Orioles on Tuesday.

McCutchen ripped a two-run double down the left-field line in the first inning and added a go-ahead single in the seventh. Hunter Renfroe contributed an RBI double and Willy Adames had two hits and three runs scored for the Brewers.

Cedric Mullins belted his first career grand slam in the second inning, one day removed from slapping a two-run single to account for the lone runs in Baltimore’s 2-0 win in the series opener.

The Orioles hurt themselves on Tuesday by committing three errors and striking out 14 times.

Brewers reliever Devin Williams fanned three consecutive batters to work out of a bases-loaded jam with no outs in the eighth.

Mullins led off the ninth inning with a double before Maryland native Josh Hader struck out the next two batters. Hader walked Austin Hays on four pitches before inducing Ramon Urias to fly out to secure his second save of the season.

With the game tied at 4-4, Adames ripped a one-out double in the seventh inning off Felix Bautista (0-1) and advanced to third on a groundout. McCutchen muscled a 3-2 slider from Cionel Perez to right-center field to drive home Adames.

That made a winner of Hoby Milner (1-0), who retired the lone batter he faced to record his first decision in 96 career appearances.

Milwaukee opened the scoring in the first inning after Adames singled and Christian Yelich walked before both runners crossed home plate on McCutchen’s double.

Baltimore erased its two-run deficit after loading the bases with two outs in the second inning to set the stage for Mullins. He deposited a 1-2 curveball from Eric Lauer over the wall in right-center field for his first homer of the season.

The Brewers quickly knotted the game up in the third after Adames scored on an error and Rowdy Tellez came around to score on Renfroe’s double to right-center field. The hit accounted for Renfroe’s first RBI of the season.