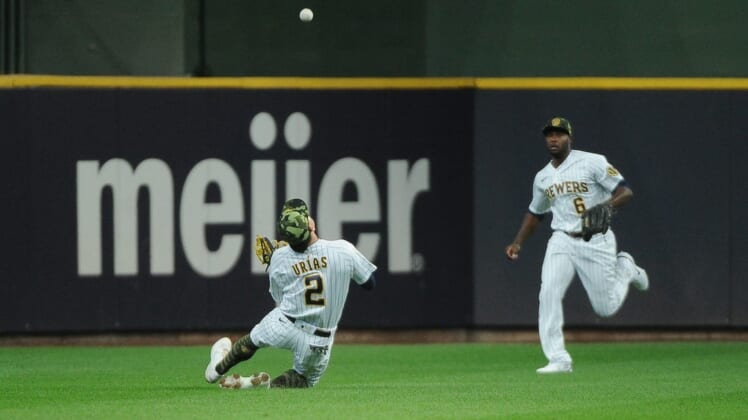 Andrew McCutchen and Luis Urias homered and Brandon Woodruff tossed six solid innings to pace the Milwaukee Brewers to a 5-1 victory over the visiting Washington Nationals on Saturday night.

Washington got two singles off Hoby Milner in the ninth, but Josh Hader came on with two outs and retired pinch-hitter Riley Adams on a fly out to right for his 15th save in 15 opportunities.

The Nationals loaded the bases on a walk and two singles off Brad Boxberger in the seventh, but he fanned Cesar Hernandez to end the inning. Trevor Gott pitched a scoreless eighth with the aid of a double play.

Patrick Corbin (0-7) was tagged for five runs on eight hits in five innings, striking out three and walking one.

McCutchen hammered the first pitch from Corbin 388 feet to right center for his third homer of the season. Urias and Christian Yelich followed with consecutive singles. Urias scored on Hunter Renfroe’s sacrifice fly to the warning track in center to make it 2-0.

Lane Thomas opened the third with his second homer to pull Washington within 2-1, the Nationals’ first run in the series. Milwaukee won the opener 7-0 on Friday night.

Urias, who has reached base safely in all 16 games since coming off the injured list, countered with his third homer with two outs in the fifth. Milwaukee loaded the bases on singles by Yelich and Renfroe and a walk to Mike Brosseau. Keston Hiura then punched a two-run single through the left side to make it 5-1.