Andrew McCutchen knocks in three as Brewers down Reds 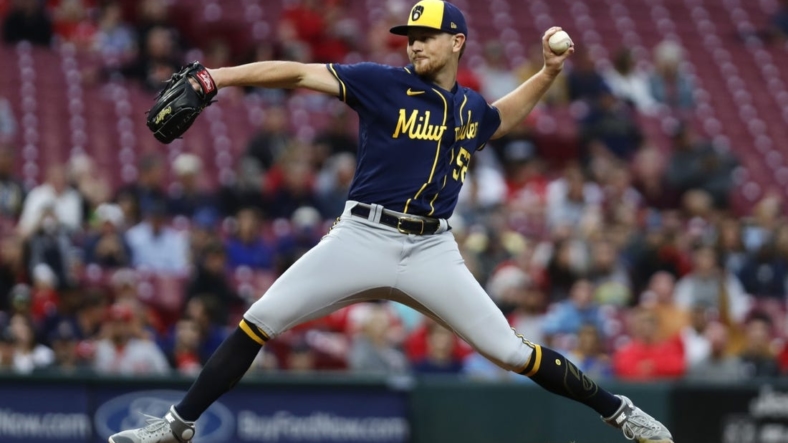 Andrew McCutchen drove in three runs and Luis Perdomo allowed just one hit in 3 1/3 scoreless innings of relief as the visiting Milwaukee Brewers defeated the Cincinnati Reds 5-3 on Friday night.

The Brewers (81-70) have won three straight to pull within two games of the Phillies (82-67) for the third and final National League wild-card spot, pending Philadelphia’s Friday night result against the Atlanta Braves.

All nine hitters in the Brewers’ starting lineup recorded a hit. Kyle Farmer led Cincinnati with a two-run double, and Stuart Fairchild added a pair of hits.

Insurance came in the seventh in the form of a two-run double from McCutchen that gave the Brewers a 5-2 advantage.

Alejo Lopez had an RBI fielder’s choice in the eighth to pull Cincinnati within two. It could have been a double play, but second baseman Kolten Wong’s errant throw allowed Lopez to reach.

Devin Williams came on to get the last out of the inning and struck out the side in the ninth to earn his 14th save.

Cincinnati wasted no time getting its offense going, striking twice in the home half of the first. Jonathan India drew a leadoff walk and Spencer Steel followed with a single before Farmer drove both of them home with a double.

But that lead didn’t last long.

Victor Caratini laced an RBI double in the top of the second, easily scoring McCutchen. Luis Urias was originally held at third, but a poor throw to the plate from right fielder Aristides Aquino brought him in to even things at 2.