Andrew McCutchen drives in 3 as Brewers gain on Cardinals 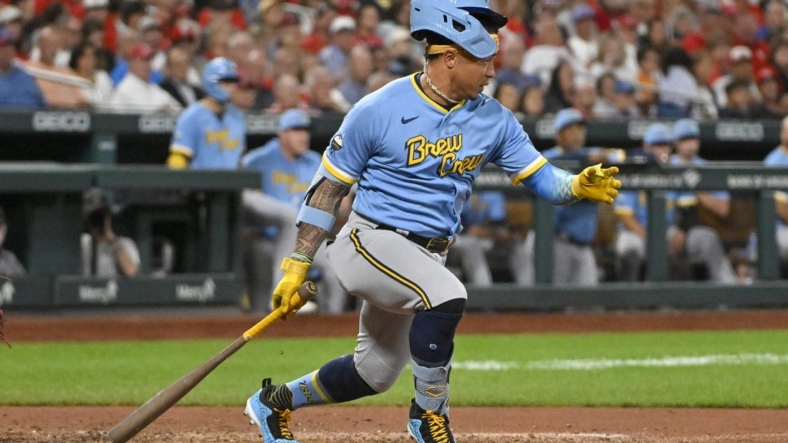 Andrew McCutchen hit an RBI double and a two-run homer as the visiting Milwaukee Brewers outslugged the St. Louis Cardinals 8-4 on Tuesday.

Willy Adames went 2-for-3 with two walks and two RBIs for the Brewers (76-66), who won for the fifth time in six games to move within seven games of the National League Central-leading Cardinals (83-59).

Nolan Arenado hit a two-run double for St. Louis, which lost for the third time in their last five games.

Reliever Luis Perdomo (2-0) allowed one run in three innings to earn the victory.

Mike Brousseau led off the game by reaching third base when Lars Nootbaar misplayed his fly ball in the right field corner. RBI doubles by Adames and McCutchen put the Brewers up 2-0.

The Cardinals responded in the bottom of the inning, taking a 3-2 lead. Brendan Donovan walked and moved to third on a single by Tommy Edman, who then stole second base.

The Brewers surged ahead 4-3 in the second inning. Luis Urias reached on an infield single and Victor Caratini hit a double. After Urias was thrown out trying to score on a grounder, Brousseau walked, Adames hit an RBI single, and Christian Yelich hit a run-scoring groundout.

In the bottom of the inning, Tyler O’Neill hit a leadoff double and scored on Edman’s single to tie the game 4-4.

Milwaukee took a 6-4 lead in the fifth inning after Hunter Renfroe hit a two-out double and McCutchen drove him in with a homer.

The Brewers made it 7-4 in the sixth inning when reliever Packy Naughton hit Yelich with a pitch with the bases loaded. They boosted their lead to 8-4 in the eighth inning on Renfroe’s RBI single.