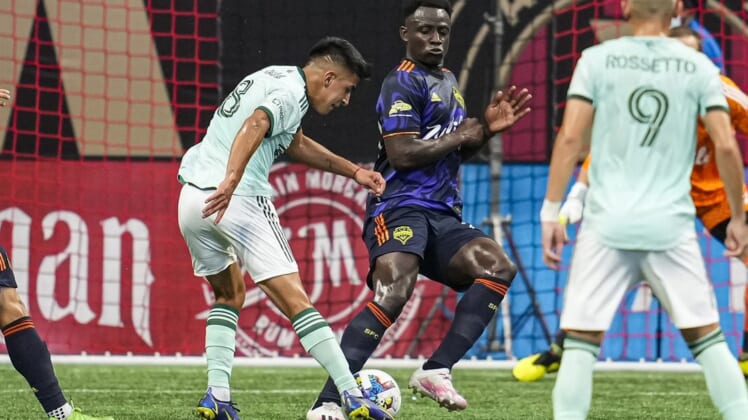 Andrew Gutman scored on a strike from distance in the fourth minute of second-half stoppage time to lift Atlanta United to a 2-1 victory over the visiting Seattle Sounders on Saturday afternoon.

Gutman’s first goal of the season pushed Atlanta (7-9-7, 28 points) to their first win over Seattle (10-12-2, 32 points) in five all-time meetings since United joined the league in 2017. It was Atlanta’s second victory overall in its last nine matches.

Rocco Rios Novo made three stops, including a crucial save of Raul Ruidiaz’s own long-range effort in the 76th minute after the match was tied.

Ronaldo Cisneros scored his team-leading seventh goal of the season before halftime for Atlanta, which began Saturday in 12th in the Eastern Conference and four points back of the seventh and final playoff place.

Cristian Roldan scored his fourth goal of the season to pull the Sounders level midway through the second half.

Stefan Frei also made three saves for the visitors, including a big stop on Luiz Araujo early in the second half of what turned out to be Seattle’s fourth consecutive road defeat.

He could only watch as Gutman’s ferocious 25-yard, left-footed strike flew inside the far left post on an innocent-looking opportunity.

The Sounders began the day in seventh in the West, with other conference teams playing later.

Atlanta went in front in the 23rd minute. Caleb Wiley played a ball down the left to find Araujo, who got around the corner and then dragged a cross back toward the penalty spot.

Cisneros hammered a low-first time shot, and defender Nouhou’s attempt to block the effort instead redirected past Frei and into his own net.

Roldan leveled the match in the 68th minute after some sustained Sounders pressure.

Nouhou played a cross toward Ruidiaz at the near post that was poked away by an Atlanta defender but not cleared from danger.

It fell to Roldan near the penalty spot. His first shot was blocked, but he was first to the rebound and drove a low strike into the bottom right corner.

That looked like it would salvage a point for Seattle until Gutman’s stunning late winner.