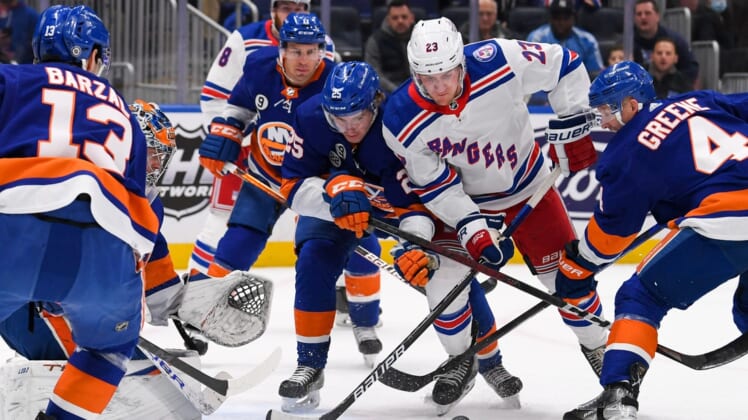 Andrew Copp recorded a natural hat trick in the first period as the New York Rangers rolled to a 6-3 victory over the New York Islanders on Thursday in Elmont, N.Y.

The Rangers (51-21-6, 108 points) clinched at least second place in the Metropolitan Division. They are tied with the Hurricanes in points, but Carolina currently holds the tiebreaker edge with one more regulation win.

Copp recorded his second career hat trick by scoring twice in a span of 4:05 and again late in the opening period as the Rangers improved to 11-2-1 since March 25.

Artemi Panarin collected four assists and ended the night at 96 points, surpassing the career high of 95 set in his first season with the Rangers in 2019-20. Adam Fox contributed three assists.

Brock Nelson scored twice, and Josh Bailey had a goal and an assists for the Islanders (35-32-10, 80 points), who lost their third straight.

Copp opened the scoring 3:43 in when he flew down the right wing, got a backhanded pass from Panarin through the slot and whipped a one-timer into the net.

Copp scored his second goal came off another Panarin feed, as he made it 2-0 with a wrist shot from below the right faceoff circle. Copp got the hat trick with 1:47 remaining in the first by finishing off a give-and-go with Strome.

Kreider put home a rebound on a power play and Strome fired a long wrister in a span of 1:52 late in the second period. Nelson’s second of the night came on a power play early in the third period before Reaves and Bailey traded goals in the middle of the final frame.