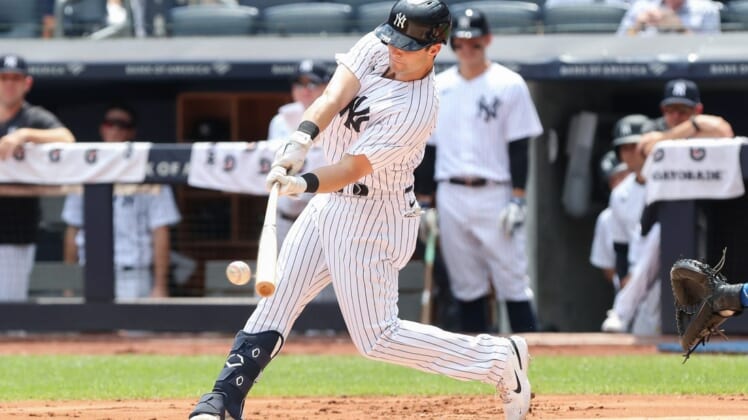 Andrew Benintendi hit a tiebreaking two-run home run with one out in the seventh inning and the host New York Yankees beat the Toronto Blue Jays 4-2 Sunday afternoon to avoid a four-game sweep.

After retiring former right fielder Paul O’Neill’s No. 21 jersey, the Yankees won for only the fifth time in 20 games and improved to 10-20 since the All-Star break thanks to Benintendi’s biggest swing since being acquired from Kansas City last month.

The Blue Jays tied the game in the top of the seventh when Jackie Bradley Jr. walked in a run against Wandy Peralta, but they were unable to push across the go-ahead run when Lou Trivino (2-7) retired Vladimir Guerrero Jr. with the bases loaded.

The Yankees quickly responded. Jose Trevino opened the seventh off Adam Cimber (9-5) with a leadoff infield single and Marwin Gonzalez sacrificed the catcher to second. After Benintendi hit a long foul ball, he drove the next pitch into the second deck in right field for his first homer as a Yankee and first since June 20.

Trivino pitched the final 2 1/3 innings of the game and earned the win by allowing no runs, no hits and just one walk.

Anthony Rizzo scored on a throwing error by Toronto left fielder Lourdes Gurriel Jr. in the first, and DJ LeMahieu hit an RBI single in the third for a 2-1 lead after Whit Merrifield hit a fluky homer in the top half. The ball bounced on the top of the right-field fence before falling over for his seventh home run of the season.

New York starter Nestor Cortes allowed one run and three hits in six innings. He struck out five, striking out the side in the sixth after Aaron Judge was plunked by Alek Manoah in the fifth.

Manoah hit Judge in the left elbow with a sinker in the fifth. Judge glanced at Manoah, Gerrit Cole started yelling from the dugout and a few other Yankees came over the dugout railing. Cole was intercepted by bench coach Carlos Mendoza before reaching the umpires while Judge and Manoah appeared to diplomatically discuss the pitch.