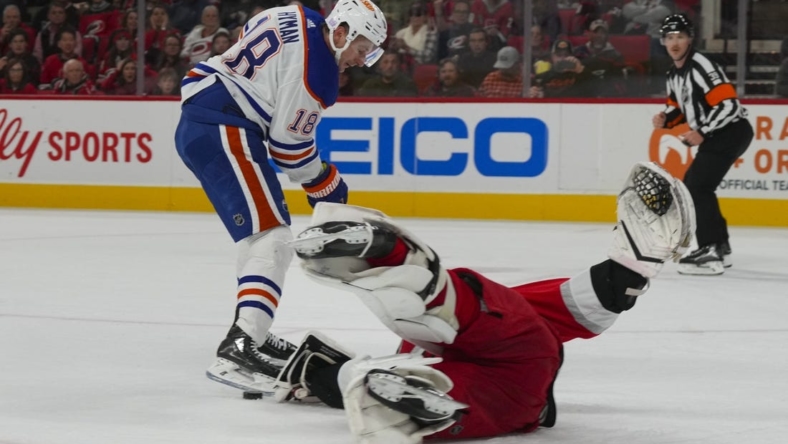 Both of Svechnikov’s NHL hat tricks have come this season against Edmonton. He clinched this one with 4:11 to play.

Brent Burns, Jordan Staal, Jordan Martinook and Jesper Fast also scored as the Hurricanes bounced back after their first two-game stretch without a point this season. Sebastian Aho, Teuvo Teravainen and Martin Necas each had two assists, while Martinook and Fast had two points apiece.

Zach Hyman’s power-play goal in the second period put the Oilers on the board, and Connor McDavid’s tally at 7:26 of the third gave Edmonton a chance. McDavid also assists on Hyman’s goal.

Jack Campbell made 25 saves in Edmonton net, but the Oilers lost for the fourth time in a five-game stretch.

Kochetkov was called up this week from Chicago of the American Hockey League because of an injury to Frederik Anderson. With the Hurricanes playing the second night of a back-to-back set, the decision was to give Kochetkov a chance, and he improved to 4-0-0 in four career NHL games.

Svechnikov scored with 20 seconds left in the first period. He took a shot from the right side that bounced in off the far post. Aho was there ready to direct the puck had it not dinged off the post.

Burns’ power-play goal at 5:58 of the second period doubled the lead.

After Hyman gave the Oilers a boost at 7:25 of the middle period, the Hurricanes were right back at it. Necas fed Svechnikov, who was driving down the middle of the offensive zone, and Svechnikov shot the puck off Campbell’s glove and in.

Hyman could have had a second goal on a breakaway following a Carolina turnover, but Kochetkov came out of the net and halted Hyman’s attempt, creating a huge crowd-pleasing moment.

Staal beat the clock, scoring in the final second of the second period for a 4-1 lead.

Teravainen sustained an upper-body injury and didn’t play in the third period.